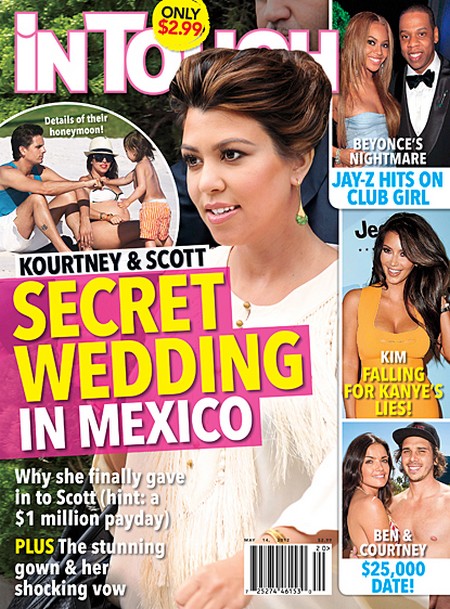 The current issue of In Touch magazine features the cover story ‘Kourney & Scott – Secret Wedding In Mexico.’  The magazine claims Kourtney Kardashian who is pregnant with her second child with Scott Disick has finally given in and said yes to his marriage proposal.  Now why would Kourtney finally decide to walk down the aisle with Scott you might ask?  Well of course because there is a big payout, $1 million to be exact.  The KarTRASHians never say NO to $$$$$!

Like her sister Kim Kardashian’s wedding, Kourtney has signed a huge deal with E! to have her marriage televised so the whole work can see her nuptials.  Now we all know how well Kim’s marriage worked and Kourtney is marrying Scott who is rumored to be a ‘low life playboy’ so I would not give her marriage much of a chance.

InTouch magazine has the scoop: The two are planning to get married at Casa Armara — Joe Francis’ luxurious estate in Puerta Vallarta, Mexico. The wedding will reportedly take place right after their second child together is born in July. “Kourtney has always considered Joe’s home a place where she can really relax.”

The magazine has the scoop on Kourtney’s gown, their honeymoon and their shocking vows!  Also included in this week’s issue Kim Kardashian is falling for Kanye West’s lies. Yikes Kanye is lying to Kim poor girl, not!  They have the shocker new this week that Beyoncé hubby Jay Z has been hitting on another girl which is her biggest nightmare.  All will be revealed in this week’s magazine!