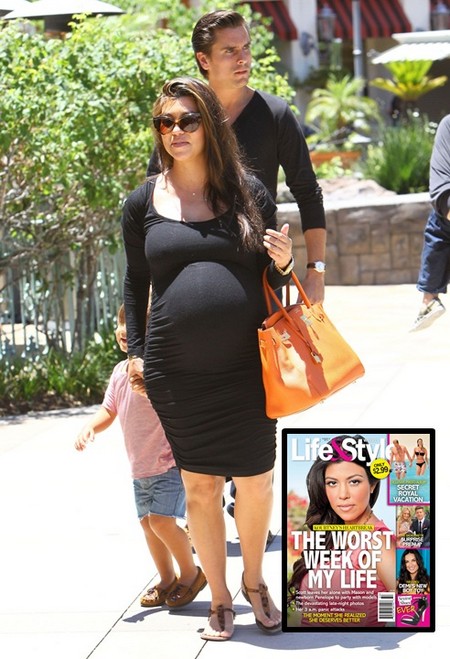 The current issue of Life & Style magazine features the cover story ‘Kourtney’s Heartbreak – The Worst Week of My Life.’ Poor Kourtney Kardashian just gave birth to her new daughter Penelope Scotland Disick and already her boyfriend Scott Disick is running around.  Kourtney is reportedly devastated that Scott is not staying with the family and instead is partying up a storm.  Scott Disick walked out and headed to Miami to party with models, while poor Kourtney stayed at home with the kiddies.  I guess you cannot teach an old dog, new tricks.

Life & Style has more: on July 22, Scott hit nightclub LIV with his posse and swarms of models in town for Miami’s swimwear fashion week. “Scott stayed out until 3 or 4 a.m.,” a source tells Life & Style. “Before that, he was drinking at the Setai bar by himself. There aren’t many fathers who would go out of town to party after having a baby, leaving Mom alone with two kids.”

The LIV encounter capped off a rowdy weekend for Scott, one that began at the Camacho Cigars Beach House on July 21 in Malibu. The next day, he chatted with scantily clad girls in a poolside cabana at Miami’s Delano Hotel. “He was hanging out with a bunch of models,” notes a fellow party-goer at the Delano.

At one point Kourtney is going to wake up and smell the coffee and realizes that Scott does not want a wife and children he wants to be the next Hugh Hefner and she just does not fit into that plan.  The only reason Scott stays around is he likes the publicity he gets from being part of the Kardashian inner circle and of course the perks and $$ help too.  What do you think is Scott Disick misunderstood or is he the douche everyone thinks he is?  Hit the comments and let us know your thoughts!

Kourtney needs to wake up fast and kick the lowlife to the curb fast!!  For more on Kourtney and Scott, pick up the current issue of Life & Style, on stands now!