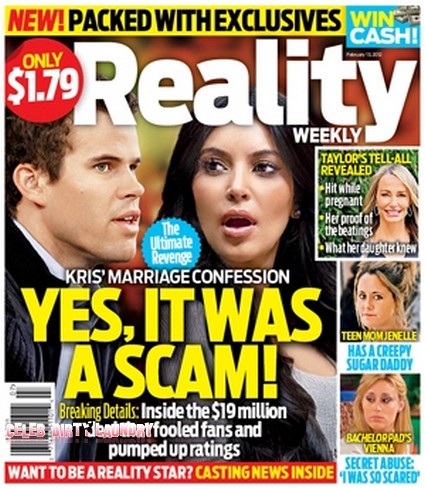 The current issue of Reality Magazine features the cover story ‘Kris Marriage Confession – Yes, it was a scam.’  Wowser! The magazine is claiming that Kim Kardashian‘s husband Kris Humphries  is coming clean and admitting that their marriage that lasted a scant 72 days was a scam.  (Tell us something we did not know!)  They have all the details inside the $19 million deal that fooled fans and pumped up ratings.  They go on to claim that Kris is headed to court to get his ultimate revenge.

Rumor has it Kim hoped that her pre-nup with Kris would keep his mouth shut and her secrets safe but she was wrong. Kris has already called her reality TV shows and her butt ‘fake’ and is screaming about how he was duped by the fantasy wedding and marriage. . Attorneys for Kris are attempting to get the marriage annulled – which will also cancel the pre-nup and any protection for Kim that it provides.  I don’t know about you, but I cannot wait until Kris reveals all.  What about you, are you interested in finding out all the gory details?

Also featured in this week’s issue the magazine gives us a sneak peek at Real Housewives of Beverly Hills‘ Taylor Armstrong‘s shocking revelations in her new book.  They include how she was hit during her pregnancy, her proof of the beatings and what her daughter knew.

To find out all this and more, pick up the current issue of Reality Magazine!