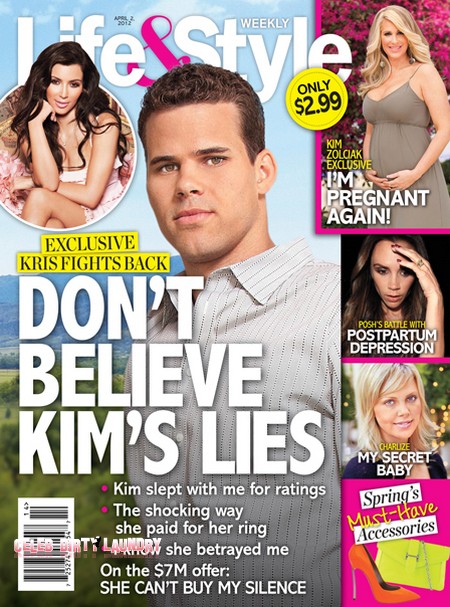 The current issue of Life & Style Weekly features the cover story ‘Exclusive Kris Fights Back – Don’t Believe Kim’s Lies.’  The magazine claims to have all the details on how Kim Kardashian offered her husband of a scant 72 days Kris Humphries $7 million to keep his mouth shut.  Much to Kim’s disappointment even that much money cannot buy his silence.  Kris wants his story heard.

Life & Style has the legal startement Kris’ team has released: “Much effort and energy to misdirect the public’s perception of what transpired between Kim Kardashian and Kris Humphries has taken place over the past several months,” Kris’ lawyers tell Life & Style. “This case will not be resolved in the court of public opinion amidst ridiculous and defamatory allegations and personal attacks directed against Kris Humphries. Rather, this case will be appropriately investigated and litigated professionally and with integrity.”

Many issues surrounding the reality star and the Nets player have been dragged out in public through the duration of the divorce proceedings, with each side lashing out about false claims. Despite reports claiming that Kris is demanding a $7 million settlement to stay silent, “No demands have been made,” insists Kris’ legal team, which includes general counsel Lee A. Hutton III of Lommen Abdo and family law experts Marshall Waller and Sandra Salinas of Feinberg & Waller. “While we are encouraged to see an apparent willingness by the other side to put big numbers out in an attempt to settle Mr. Humphries’ claims, we respect and will continue to observe the integrity of the legal process.”  In other words, Kris, 27, is reserving the right to bare all of Kim’s secrets by not taking a buyout.

The magazine has all the details on how Kim slept with Kris to help the rating on her reality shows.  Kris feels like Kim betrayed him.   Kim’s team has been trying to spin the divorce story like it is all Kris’ fault.  Her reality show Kourtney & Kim Takes NYC tried to make Kris look like the bad guy, but it failed.

Kim has been trying to get Kris to admit to fraud in the marriage.  She claims Kris never intended to move to LA in the first place and all the while intended to stay in Minnesota.   At the same time Kris wants Kim to admit that their marriage was a sham, made for TV, and she never intended it to be a real marriage at all.

It sounds like Kris is really to fight and we may soon learn all of Kim’s dirty little secrets.  “One thing is certain: Kris Humphries intends to set the record straight,” his lawyers assert. Who are you, team Kim or team Kris?