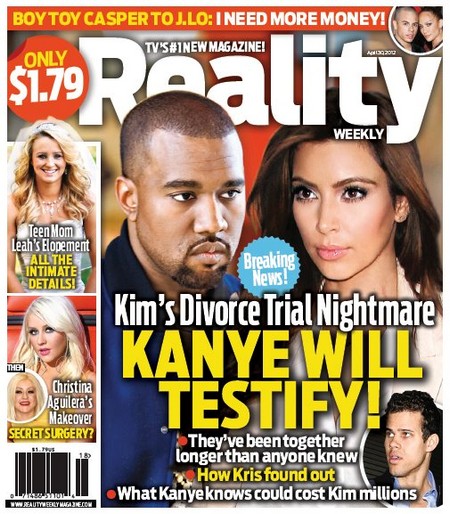 Kris Humphries intends to get his way and have Kanye West testify at his divorce trial with Kim Kardashian.  It seems that Kanye’s testimony may hold the key to Kris winning the trial.  Kim’s divorce is shaping up to be a nightmare as Kris pushes for an annulment to his 72-day marriage on grounds that he was scammed.

Kris knows that Kim never intended to stay married to him and he wants the court to agree, thereby cancelling his pre-nuptial agreement.  This will remove his legal obstacle from telling everything he knows about Kim to the media – even down to her sexual behavior and reality TV show setups.  A source reveals: “Kanye really adores Kim and he would hate to have to reveal information that would hurt her, Kanye is crazy in love with Kim.”

The cover story of this week’s issue of Reality Weekly Magazine features the lead story: Kim Kardashian‘s divorce trial nightmare – Kanye West will testify!  We learn form an inside source: “Kris has been trying for an annulment, which would nullify their pre-nup, and Kanye could hold the key to making it happen,” an insider tells RW. “If Kris gets his way, Kanye will be called to the stand to answer questions about Kim’s true motivations,” adds the insider. “Things like how much money she said she earned from the marriage.”

Plus, get the scoop on why Casper Smart wants more money from Jennifer Lopez, Teen Mom Leah‘s secret elopement, and the real story behind Christina Aguilera‘s amazing makeover!

Do you think that Kanye will be at the divorce trial – will he be forced to testify?  Let us know in the comments below.