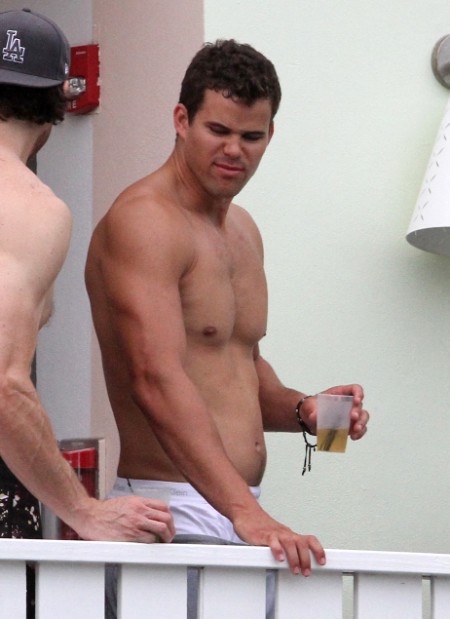 This has got to be embarrassing. Kris Humphries is being sued for being a herp-a-derp! A woman claims the basketball star gave her the lovely going away present after a hot night of sex in 2010.

According to TMZ, Kayla Goldberg  said she met up with Kim Kardashian’s ex at LA club, Trousdale, on the Sunset Strip and later went back to his place where they had sex multiple times including oral sex. She claims Humphries was not wearing a condom for a portion of their banging so she knew he had herpes though he shied away from telling her. Maybe he thought she could figure it out? If it was noticeable enough for the girl to see it then why didn’t she demand he wear protection the entire time? See girls? This is why you shouldn’t grow up stupid! Or have sex with dumb basketball players.

Do you think Kayla was trying to get pregnant? Why else would you let a basketball player go commando? They are notorious filthy wh-ores! I don’t know who’s dumber – Humphries for putting himself in the position or the chick for not thinking her plan through enough and getting herpes.

Because that’s what she’s crying now. Kayla said she got diagnosed with herpes a week later. Her symptoms were sore throat, fever, legions, vaginal irritation and intense shame. Naturally she is suing for unspecified damages.

So… Kim Kardashian has herpes? That’s where my mind jumped. I don’t really care if Kris has it and I certainly don’t care that Kayla Goldberg has it. Kim and Kris started dating in December of 2010, a couple months after the herpes contamination took place. So if Kayla isn’t just lying to get a pay out then Kim might have the derp as well! Are you surprised? I’m not. With her track record I bet she had a pantry full of Valtrex before she even met Kris!

What do you think of the herpes story? Do you believe Kris Humphries has herpes or is he just an easy mark now that Kim has embarrassed him for all the world to see?