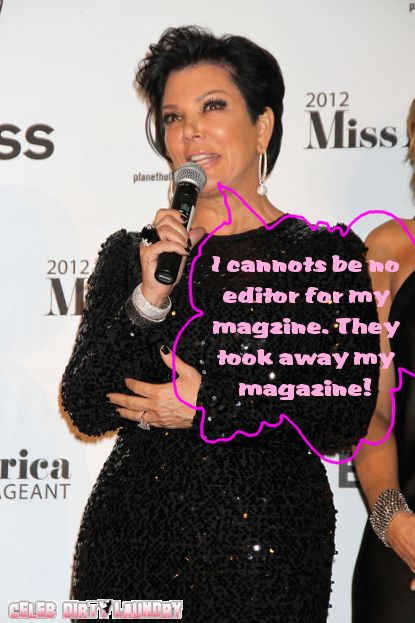 The Kardashian family has been working hard to develop a couple projects over the past few months, most notably a possible magazine deal with American Media Inc., as well as a line of Barbie Dolls bearing the family’s image. However, it has come to our knowledge that both deals have, reportedly, been canned.

And Kris Jenner is probably the one to blame.

American Media Inc., the company behind the popular Star Magazine and The National Enquirer, has trashed the idea of a Kardashian-themed magazine after sources claim that Kris was demanding she have FULL editorial rights to the magazine. Sometimes, mama Kardashian needs to know when to stop asking for things!

“AMI chief David Pecker made it clear that there was no way he was going to tell his editors what stories they could and couldn’t do,” says a source.

A rep for the Kardashian family has come out and said: “Kris has never had a conversation with AMI regarding this issue [of her demands].” The rep then continued to comment on the “Robert Kardashian is not Khloe’s Real Father” story that was recently published in Star Magazine. “The allegations contained in the Star article about Khloe not being a Kardashian are completely fabricated, false and untrue. Robert Kardashian is absolutely her biological father, so of course she was upset over their story.”

In slightly related news, their deal with Mattel has also fallen through. The family was in talks with the mega toy manufacturer to produce Kardashian-inspired Barbie Dolls. Just what we need, right? Apparently, the company had a similar mindset, saying in a statement: “As popular as the Kardashian sisters are, at this point in time we are not manufacturing Barbie-branded Kardashian dolls.”

*Sigh* Oh, dear, Kardashians. I know you — and especially your mother — want to take over the world really, really, really bad. But I guess you’re just going to have to find a way to do it without a magazine and an army of Barbie-Dolls-that-look-like-you. Cheer up, you’ll always have a home at E! (and in the gossip trenches of our website).