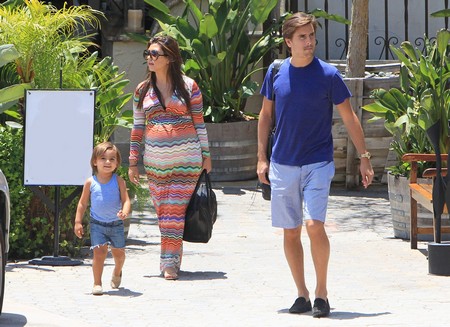 No shock at all in this story. Momager, Kris Jenner, is rumored to be working her butt off to make deals in order to cash in on Kourtney Kardashian and Scott Disick’s new daughter, Penelope Scotland. Kris’ scheming has left not only Kourtney furious, but even famewhore Scott Disick has had enough! Radar Online has more.

“Kris immediately started trying to make money off the baby, literally from the moment she was conceived. Kourtney was already getting annoyed during her pregnancy because her mom talked nonstop about branding girly things for the baby. Since the birth Kris has stepped it up with her money making ideas. Even Scott stepped in and told Kris to back off, he actually told her they needed time to enjoy their baby before they share her with the world.”

“But Kris was relentless and started taking photos with the intent to sell them, and the whole family knew it. The last straw was when Kris wanted to take pictures of the baby during the birth, while she was coming out! Scott drew the line there, he said absolutely not! Both Kourtney and Scott have told Kris to step away, their baby is not some money making tool. They have a deal in place with a magazine to run the first photos of Penelope, but after that they want a little privacy for her.”

Do you think Kris has crossed the line by trying to pimp out Penelope, who is not even a month old?  Obviously the woman has no common sense or boundaries.  If you’re born into the family, there’s a dollar value on your head immediately.  Will Kris’ need to pimp out every move her family makes eventually cost her?  Tell us your thoughts in the comments below.