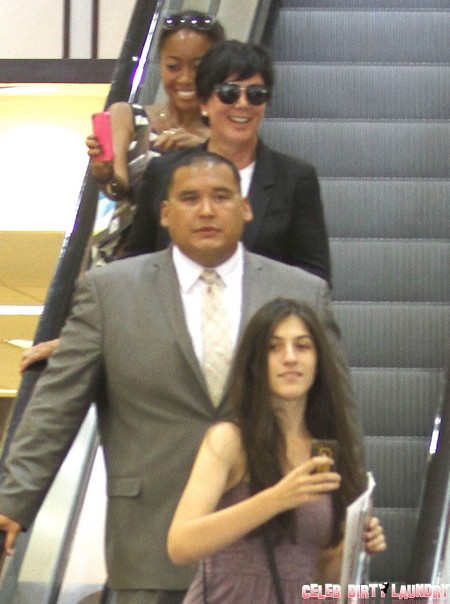 In the not so shocking news today, we hear that Kardashian momager Kris Jenner has tried to use her fame to snatch up five brand new iPhone 5s for her family—and was rejected! The Kardashian family always have to have the newest, hottest accessories, and so Kris took steps to make sure that her girls Kendall Jenner and Kylie Jenner wouldn’t have to deal with the peasantry lined up outside of the Apple store yesterday morning to pick up the new, super slim iPhones.

A source indulged our love of scandal, reporting that Kris called the store, demanding the employee “set aside five iPhones for her and she’d send someone to pick them up when they were released September 21st.” This proves how insane and dysfunctional she is! The iPhone 5 has been on top security lock down—I bet the president couldn’t even get one put on hold if he wanted to!

The employee said that she would have to get in line with everyone else, and Kris wasn’t having any of that! “Kris got angry and demanded to talk to the manager. But no manager would speak to her because this wasn’t a negotiable issue.” Duh! Considering that only the top Apple company employees were in-the-know, she couldn’t possibly expect the minimum wage employees to have access, or be impressed by her lackluster stardom! Idiot that she is, Kris sent her assistant in anyways, assuming her demand had been followed out! Her assistant was told by a security guard, “See that line? Go wait in it and you will be helped.” BAM. Isn’t it great to see the Kardashians treated like the D-listers they are?

It sounds like her daughters, Kendall and Kylie, were willing to be more down to earth, and were spotted at the Apple store picking out their new phones. We’ve previously reported that they are trying to make it on their own—without Kim Kardashian’s sex tape, or Bruce Jenner’s Olympic gold medal. Kendall tweeted, “Kylie: ‘mom why would you get the white iPhone? black is way cooler?’ mom”  * in all seriousness * Kylie. Shut. The. F**k. Up.” Good to see open lines of communication in the family!

Do you think the Kardashian family deserve special treatment? I say that Kris Jenner must be reaching senility if she thinks her reality show makes her exempt from the rules we all follow to get our fix of Apple technology! Does anyone have the new iPhone? Is it worth all the fuss?