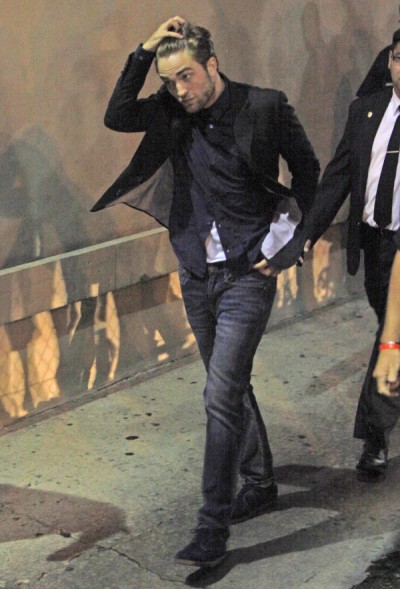 This town ain’t big enough for the both of us! Those words might be playing on repeat in Robert Pattinson’s brain as news leaks out that he’s considering quitting the biz over Kristen Stewart’s bonehead dry hump heard round the world.

Now before some of you go out and start ranting on your Kristen Stewart Must DIE! websites, know that Rob’s hat was never that into acting to begin with and Kristen’s backseat booty call really opened his eyes to that. He should be thanking her! But something tells me you won’t be!

Gather reports a source said, “Rob has always had a love-hate relationship with his career. He loves earning millions from acting, but he hates the constant intrusion into his private life. He has more than enough money to live very comfortably for the rest of his life. Quitting Hollywood is something he has talked about. When he found out Kristen had cheated, he opened his eyes – people in showbiz just aren’t very nice.”

This totally reminds me one of the best quotes of all time when Peter Gibbons in Office Space asks his redneck neighbor what he’d do if he had a million dollars and he replies, “I’ll tell you what I’d do man – two chicks at the same time.” Brilliant!

I think that’s sound advice for Rob, but if he’s not down on the menage-a-trois, I could totally see him taking a step back from acting and focusing on his music career. In all seriousness, and I totally wanted to rip on him but I just can’t, Rob’s actually a pretty talented musician. He’s got that Ray Lamontagne thing going on and it works for him. I was super impressed when I listened to one of his songs online and then listened to it on repeat for the rest of the day. Not really. Maybe really.

So why doesn’t he make the jump full time? He’s got money. He’s got fame. Why not challenge himself if his heart’s not in acting? Music is no less of cutthroat industry but I could see him happy as a clam playing the starving artist, coffee house/dank indie club scene. And if that doesn’t work out then he could always do two chicks at the same time.

How much would you blame Kristen Stewart if Rob quit acting full-time? Did you ever feel that Rob wasn’t all about the Hollywood lifestyle?