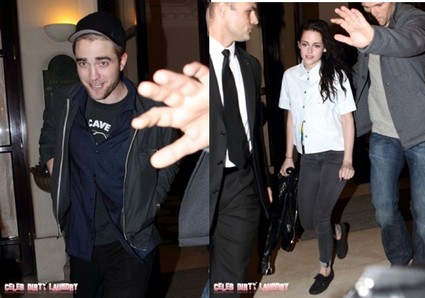 Kristen Stewart is no longer flying solo while residing in Paris.  Thankfully her (and mine – we share) boyfriend Robert Pattinson has joined her in the romantic city of lights.

RPattz made the trip from NYC a few days ago, while KStew has been situated there on a modeling assignment over the past week.  We’ve caught small glimpses of the Twilight actress entering and exiting her hotel, as well as a few appearances at several fashion shows – but never with her man at her side.

Did we think there was trouble in paradise?  Heck no!  Luckily they are reunited and all is well.  The two made separate exits from the Meurice Hotel and were later spied at the Sardegna Tavola restaurant for a romantic dinner.  I guess I didn’t get an invite.  Next time.

Click on the thumbnails below to enlarge 9 more pics of Kristen Stewart and Robert Patitnson in Paris!