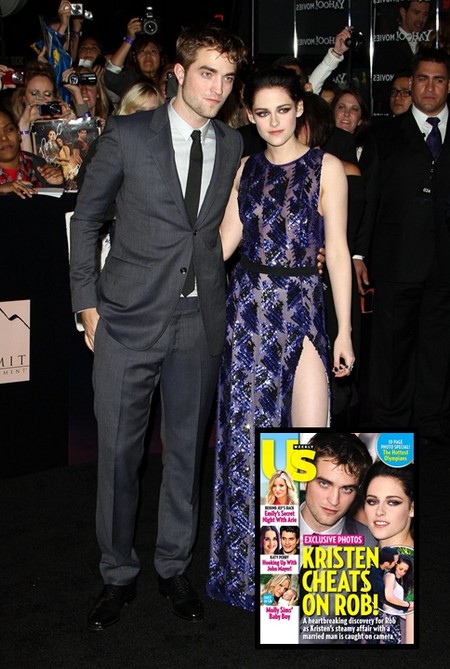 Kristen Stewart has broken Robert Pattinson‘s heart by having a steamy affair with her director, Rupert Sanders, during the filming of Snow White and the Huntsman. As we reported on Celeb Dirty Laundry earlier today Robert has come right out and said that he is definitely not going to marry Kristen. They say you reap as you sow and it looks like Kristen is going to pay the full price for her infidelity. The current issue of Us Weekly has the shocking cover story: ‘Kristen Cheats On Rob – A Heartbreaking Discovery For Rob As Kristen’s Steamy Affair Is Caught On Camera!’

Can you believe it? Twihards will be crying in the blood beer. What happened to Hollywood’s hottest couple? Was Robert too much of a wimp for Kristen?

Us Weekly reports: On July 17, the 26-year-old actor’s girlfriend and Twilight costar, Kristen Stewart, 22, was caught in a series of steamy rendezvous with her Snow White and the Huntsman director, Rupert Sanders, 41 — and only Us Weekly has the photographic evidence.

Sanders — married to British Vogue model Liberty Ross, 33 — has two children, ages 7 and 5. During his marathon makeout session with Stewart, “it seemed like they couldn’t get enough,” according to one photographer.  Reps for both Stewart and Sanders had no comment

This is startling news and will undoubtedly lead to the breakup of the Twilight couple. Even vampire love can’t withstand a public cheating scandal with photographic evidence! This looks to be for real folks! We always said that the relationship between Rob and Kristen was a glorified studio promoted showmance – but we never expected this!

People reports: The relationship between Kristen Stewart and Robert Pattinson has been rocked by the revelation that the actress had a brief fling with a married director, sources tell PEOPLE.

“Kristen is absolutely devastated,” says one source. “It was a mistake and a complete lapse in judgment.”

“She wasn’t having an affair with Rupert. It was just a fleeting moment that shouldn’t have happened,” says the source. “She never meant to hurt anyone. She’s a good person who just made a bad choice.”

A rep for Sanders, who is married and has two children, could not be reached for comment. A rep for Stewart had no comment.

This story is obviously not over. Can Robert accept that Kristen cheated on him? Even if this was a mistake as it is according to Kristen’s friends, can you see Rob dealing with the humiliation and staying with her? I doubt that Rob will ever accept this infidelity – and why should he? Stay with Celeb Dirty Laundry as we follow this breaking news story.