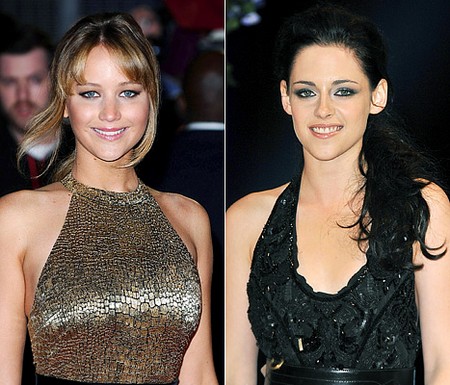 Twilight misery princess, Kristen Stewart, is rumored to be extremely jealous over the success of The Hunger Games star Jennifer Lawrence.  Not only is Jennifer’s franchise eclipsing Kristen’s, but Jennifer is getting rave reviews for her acting ability whereas Kristen never did.  Furthermore, Kristen fears that she will be passed over for the more talented Jennifer for Hollywood’s top productions.

According to the National Enquirer bad blood is most definitely brewing: ‘The Hunger Games is now the talk of Hollywood and it’s predicted to do even better at the box office than the megahit Twilight series,’ said a source. ‘Worse still, Jennifer is getting critical acclaim for her acting talents, which no one has ever given Kristen.’

Jennifer’s career is off to an amazing start, as the young actress already has garnered one Best Actress Oscar nod.  She was nominated for her role last year in ‘Winter’s Bone,’ a film about drug dealing in Appalachia.  Meanwhile Kristen has yet to have her work earn that level of respect from her peers.

Insiders claim that Kristen is afraid she and Jennifer will end up battling for the same roles in the future.   The Hunger Games had a stronger opening weekend than any of the Twilight films, making Jennifer the more bankable star by industry standards.

The source further explains: ‘Kristen is nervous about going head-to-head with Jennifer for roles,’ the source continued.  ‘Kristen doesn’t consider herself a natural beauty, and she knows Hollywood is so fickle that it’s always the pretty girl who wins the big parts.  Jennifer has the best of both – talent and looks – which has Kristen fretting for her future.’

Kristen’s next movie, Snow White and the Huntsman hits theaters in June and she has every reason to be nervous.  It’s coming on the heels of The Hunger Games success and it’s unlikely to have the same level of box office triumph.

Do you think that Jennifer is the better actress?  Which star is more beautiful?  Let us know in the comments below.