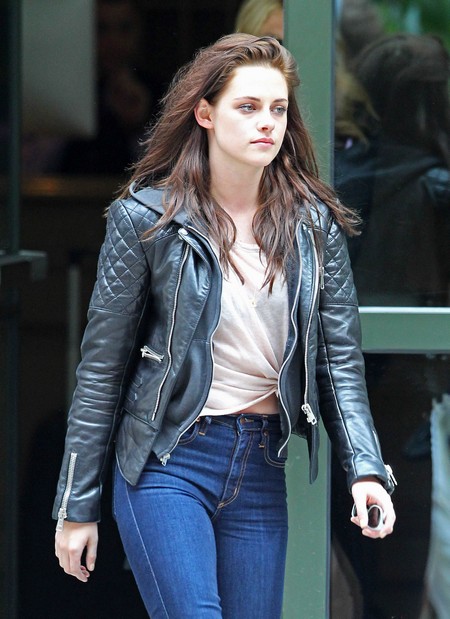 Well look who’s getting candid and finally shedding some of her shyness!  Kristen Stewart, who normally is painfully awkward and tight-lipped when discussing – well anything really – has come forward to admit that the love scenes between her and real-life boyfriend Robert Pattinson in Breaking Dawn were in fact edited – for being too sexy!

First of all – if this is the case, those scenes BETTER be included on the DVD.  Secondly, what was so racy that needed to be edited?  My mind is running all over the place..

In an upcoming interview on The Graham Norton Show, Kristen discussed the highly talked about intimate scenes between her character Bella and her vampire husband Edward.

“It is a bit full on but it’s edited. I see scenes and I think why is music playing over that, I was definitely making sounds and it could be so sexy and it’s not.

‘The ratings’ board breaks it down so technically and apparently, thrusting is a huge problem for the children.”

Thrusting eh?  Do tell us more! Kristen also discussed her upcoming role in Snow White and The Huntsman, in which she stars alongside Chris Hemsworth and Charlize Theron.  I wonder if there will be any ‘thrusting’ going on in this film?  Maybe not, as Kristen mostly discussed the battle scenes – one in particular in which she injured Hemsworth.

“I punched him right out of his close up. It’s funny now but when it happened I thought, “I have just ruined the movie and I love this thing and we are going to have to stop filming.”

The Graham Norton Show airs this evening on BBC1 at 10:35.