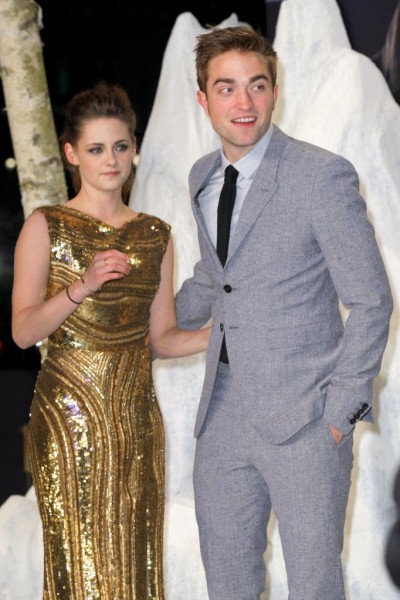 Kristen Stewart and Robert Pattinson are still making it a go. Everyone thought there were destined for the big break up after promotions for Twilight ended but sightings together after Thanksgiving shut people up for awhile. Apparently the couple are still working on their relationship but Rob may be making Kristen work a whole lot harder.

“Rob is at a point where he sometimes ignores her. He’ll go out and won’t respond to her calls or texts right away,” a source told the magazine. “Things will be strained for a while. [They] hang with his friends more. She knows she has to go along with it. She is working hard at the relationship.”

Can you see Rob acting this way? Rob doesn’t seem like the bitchy type hell bent on making his woman pay to me. And Kristen definitely doesn’t seem like the groveling type. She was for awhile when she was in the middle of the Rupert Sanders shit storm but I figured she got most of her moxie back the minute she started wearing those crotch flashing Zuhair Murad outfits.

The source is making her out to be the sad puppy dog, following her boyfriend around, hanging on for any little bit of attention. The source is making her out to be how I always figured Robert Pattinson was in the relationship. Kristen always seemed to have the pants firmly on. Did Rob sense this was his opportunity to change the balance of power? Is absolute power corrupting his absolutely? Could be. Could be. But I think it’s all much less smutty. What’s probably more true is that Kristen used to get whatever she wanted and Rob just went along with it because he never cared and now she’s letting him have more say so. The power isn’t necessarily shifting but perhaps it’s equaling? Rob’s got to know if Kristen Stewart struggles to make him love her she won’t stay around for good? Subconsciously is that what he wants? Whoa. This relationship is deep.