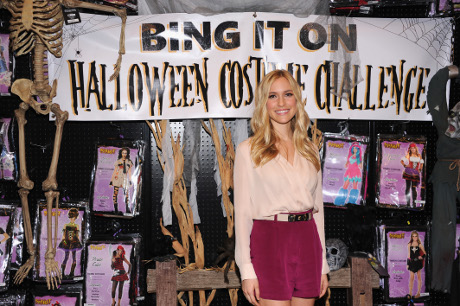 TV personality and designer Kristin Cavallari got in the spooktacular spirit of October to host and help judge the Bing It On Halloween Costume Challenge at New York City’s Spirit Halloween. The event was tons of fun, and the costumes the challengers pulled together were out of this world, creative, and Halloween chic. The new mom, famous for her roles on Laguna Beach and The Hills, appeared at the event to challenge competitors to come up with the most unusual, unique, and creative Halloween costume in under five minutes.

Wow! What a challenge! But the contestants got it done. All the contestants had to qualify by first taking the Bing It On Challenge, a blind search at BingItOn.com that aids people in comparing search results between Bing and Google and, in the process, helping them figure out which they prefer for daily use.

While the competition was fierce, and many entries had winning style, the first prize went to a psychedelic flower costume — which was complete with a tight green body suit for the stem!

During the spirited event, Kristin shared how she was planning to spend her Halloween at home with her family. “Jay has to work so we’re just going to stay home and give candy to the trick or treaters,” she said. She won’t be dressing up this year, but she’ll definitely be dressing up her lil’ son! “We’re dressing him up as a lion because he’s a Leo.”

Kristin also shared some juicy details regarding her life on The Hills during an exclusive #BingIt Twitter chat. She informed her fans that she does in fact still keep in touch with Alex Murrel, definitely doesn’t hate Lauren Conrad, and that she and Brody Jenner WERE NOT actually dating during the time the show was being filmed. Apparently, as admitted by her, that was all just an act for the cameras! *Gasp* But we thought everything that was filmed on that show was true, true, true! Our world has been shattered.

Don’t forget to check out some of the wonderful pictures from the Bing It On Halloween Costume Contest! Click on a picture below to launch the gallery — and tell us what your Halloween plans are in the comments section below.