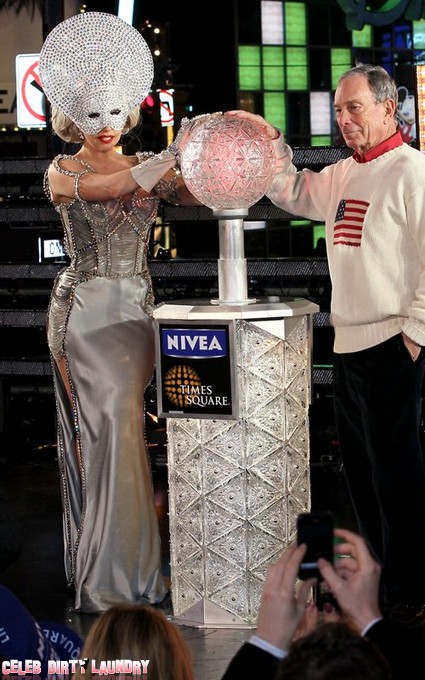 Lady Gaga  is known for her over the top and outrageous outfits – and this New Years was no exception. The pop star looked like she was taking fashion cues from the crystal ball itself when she joined the Mayor of New York City for the traditional ball drop in Times Square. The drop officially welcomed in 2012.

Ryan Seacrest asked Gaga ‘Can you describe what you’re wearing?‘ To which the most famous woman in the world replied ‘Um I don’t know.’ So what hope do we have in describing her Versace creation? All I know is that it gave the 22,000 LEDs on the crystal ball some serious competition. Michael Bloomberg didn’t dare compete. He donned a sweater featuring a US flag for their big moment and looked a little overwhelmed by his partner in crime on stage.

Gaga changed outfits several times during the telecast. No surprises there! She performed earlier on Dick Clark’s New Year’s Rockin‘ Eve in a skin tight black catsuit. Watch out Anne Hathaway – it looked like she was auditioning for the part of catwoman. The 25 year old wowed the masses with a medley of songs including Marry The Night, Heavy Metal Lover and Born This Way.

The stars were out in force in New York. Justin Bieber, Santana and Pitbull also performed to a larger than expected crowd thanks to the milder temperatures. But no one was going to outshine Lady Gaga in her native New York at the biggest New Year’s Eve party on the planet.