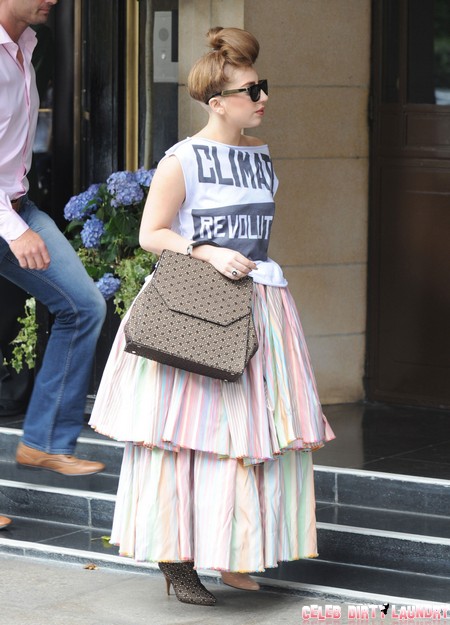 What a week it has been for Lady GaGa and her fans. New photos popped up of the one-of-a-kind star performing in the Netherlands and it’s very apparent that GaGa’s once uber toned figure is long gone. We all know that everybody is a critic and so the internet lit up with people slamming her for the weight gain and of course tons of fat jokes are swirling.

Also when any woman gains weight the pregnancy question is on the tip of everyone’s tongue as well. Even Kelly Osbourne has weighed in on the topic of GaGa’s weight saying on Alan Carr’s talk show,

“I think she is pregnant because she has been covering up this part of her body recently and I have been noticing that a lot, and her style has changed and you can’t bleach your hair blonde when you are pregnant.”

Hmm. I have seen a few photos that also lead me to believe that it could indeed be a pregnant tummy that GaGa is sporting. If you’ve carried a kid you know exactly what I’m talking about here. GaGa is of course denying such things and she had this to say about the whole weight controversy while in Amsterdam,

“I’m dieting right now, because I gained, like, 25 pounds. And you know I really don’t feel bad about it, not even for a second. I have to be on such a strict diet constantly. It’s hard because it’s a quite vigorous show, so I tend to bulk up, get muscular, and I really don’t like that. So I’m trying to find a new balance.”

Her body looks pregnant but her behavior seemed to fly in the face of it, at least on one public occasion because during that Amsterdam show she appeared to smoke a joint while onstage. We all know that drugs and alcohol are NOT a mother’s best friend, right?

Do you think GaGa is trying to hide a pregnancy or has she just gotten lazy and given her body a needed break? Don’t most artists whip themselves back into shape BEFORE touring? Tell us your thoughts in the comments below!