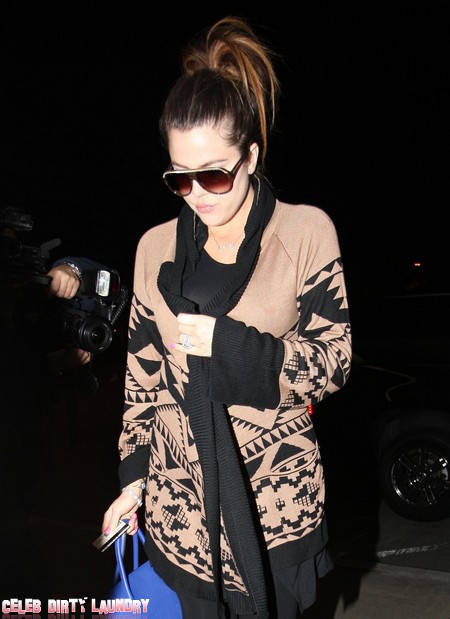 Khloe Kardashian is suffering from withdrawal symptoms since her husband, Lamar Odom, cut off sexual relations.  Lamar is retaliating for what he sees as losing control of his life to the Kardashian famewhore circus.  It seems that Lamar is convinced that Khloe has ruined his career and he places the blame for this on the dominant role that reality TV plays in their lives.

We all know that Lamar was demoted to the minor leagues after playing the worst basketball of his career. Lamar is so pissed off at Khloe that he refuses to have sex with her and is even withdrawing his offer to get pregnant via IVF!  Lamar has simply shut down and told Khloe to leave him alone for a while.

The In Touch Print Edition of March 26 has details:  Khloe used to think that Lamar shared her dream of having a baby – but no more.  Ever since Lamar was traded to the Dallas Mavericks – and temporarily demoted to the D-League – Lamar, 32, has blamed Khloe and her fame-seeking family.

‘He resents the show for taking his focus off the game,’ reveals an insider of Lamar, adding that he feels it’s wrecked his reputation, as well.  And he’s retaliated in the most painful of ways.  Turning away from Khloe both emotionally and physically, Lamar has been denying her sex (her rep denies it.)

‘He really shut down and told her to leave him alone for a while,’ shares a friend.  And it’s heartbreaking for sensitive Khloe, who complained on a February episode of Khloe & Lamar that she felt ‘rejected’ when he wasn’t in the mood.

Even worse, the friend says, he has halted their plan to go through IVF – and friends worry they may not stay together long enough to start a family.  ‘Khloe is trying to stand by him, but it’s hard,” the friend says.  ‘He’s always so angry.’

Once again, the truth is that Lamar needs to blame himself for his downfall.  What business does a serious professional athlete have with a silly member of the Kardashian Klan?  Right, no business at all!  Lamar wants the fame and dollars that come along with the Kardashians.  So shut up Lamar and give Khloe what she needs.  You made your bed… now go and lie in it… with Khloe.