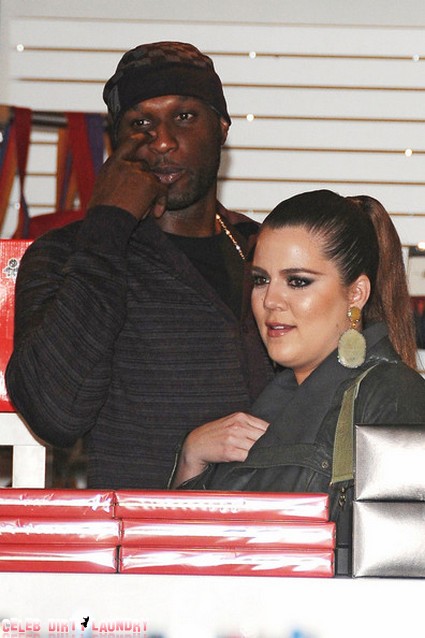 We are expecting another Kardashian divorce and for good reason! At the cost of being away from her mom, Kris Jenner, and her fellow Kardashian sisters, Kim and Kourtney, Khloe Kardashian relocated to be with her husband Lamar Odom when he got traded to Dallas. And how does the ingrate repay her? By spending a fortune cavorting with full-contact strippers in Washington, DC, while Khloe sat at home, alone and lonely.

According to Radar, while Khloe sat like a widow at home, Odom was spending hundreds of dollars on strippers who were “grinding on him.”

A source told Radar, “Lamar looked to have about 500 one dollar bills in his hand and he gave all of the money to the dancers throughout the night… . He made sure the girls were well taken care of. He was throwing money at the women.”

In addition, Lamar was seen “sprawled out” in the Stadium Club strip club but the worst news of all is to follow.

The Daily Mail claims that Lamar took the next step and went into a private room – where strippers become prostitutes – and he took a stripper who resembled his wife with him. What Lamar did with the stripper in private we can not report.

Kim dumped Kris Humphries after just over 10 weeks of marriage and for reasons still to be determined. With this public humiliation of Khloe how long will it be before she files for divorce.