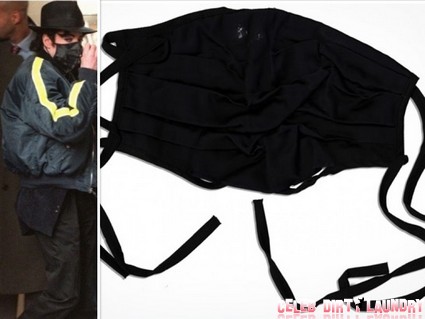 Cashing in on the dearly departed is big business. Here’s the latest tacky item up for grabs – it’s the last surgical mask Michael Jackson ever wore. The King of Pop had it on at rehearsals for the ‘This Is It’ tour the night before he died. It even has traces of MJ’s makeup and a strand of hair attached.  TMZ  found the  mask on the Nate D Sanders auction house website. Here’s the description…

Michael Jackson’s black surgical mask, actually worn by the superstar on the eve of his death. Jackson’s personal bodyguard, Eric Muhammad, provides a letter of provenance and proof of his history in Jackson’s employ, both included in this lot. The King of Pop was found unconscious in his home and then rushed to the hospital where he was pronounced dead on 25 June 2009. The night before, the star spent several hours rehearsing for his comeback tour ”This Is It” at Los Angeles’ Staples Center. This is the mask that covered the singer’s nose and mouth in these last 24 hours of his extraordinary life, and contains visible traces of his makeup. The mask, especially made for Jackson, is made of silky fabric sewn in a pleated design, and the pleat folds are relaxed in the center area due to wear. A single dark strand of Jackson’s hair accompanies the mask. Measures 8.25” x 5.75”, and cloth ties extending from each of the mask’s four corners measure 11.5”. Separation present to bottom seam that once connected the fabric to the trim, a characteristic of the otherwise near fine mask that allows it to be identified in photos of Jackson wearing it. An incredibly rare and extremely personal affect that belonged to the greatest entertainer in the world.

So there you have it. Want to add it to your collection? Just remember these items don’t come cheap. Bidding has already passed $20,000. It’s expected to reach $150,000. There are four days left on the auction.