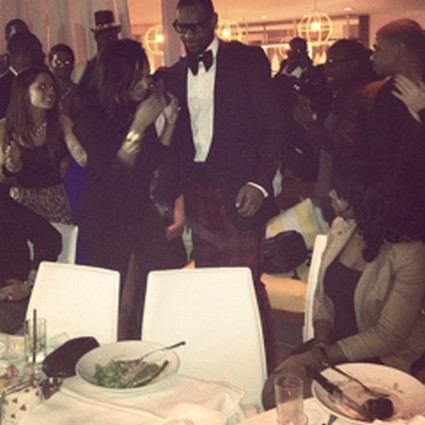 It’s about time! After being together for more than a decade, Miami Heat forward LeBron James finally got engaged to his longtime girlfriend Savannah Brison last night at Miami’s Shelborne South Beach Hotel.

The couple, who are high school sweethearts, got engaged last night at James’ 27th birthday party/New Year’s Party. James got down on his knee towards the end of the meal and judging by pictures, Savannah was extremely excited and emotional.

Before the party, friends of Brison may have had an inkling James would be proposing and tipped her off as she re-tweeted a message saying, “Very excited for tonight’s festivities :) I got a feeling this is going to be a New Years to remember! @SavannahRB @itsgabrielleu @J9Howard”.

The couple, who met at High School in Akron, Ohio, were in the company of some big name celebrities, including Queen Latifah, Jamie-Lynn Sigler, Nas, and Lauryn Hill. Apparently James’ family and the couple’s two children, 7-year-old LeBron Jr and 4-year-old Bryce, were on hand to celebrate as well!

The couple received many congratulations on Twitter soon after the ball dropped.
Miami Heat owner Micky Arison tweeted, “Congrats to LeBron. @KingJames and Savannah so happy 4 u guys.” Clippers point guard Chris Paul wrote, “Happy for my brother @KingJames and sis @SavannahRB on their engagement!!! Extremely happy for them and the good times to come #HappyNewYear.”

James is definitely staring off 2012 right. He has been averaging 33 points, 7.5 rebounds and 7 assists per game. No details on the ring yet, but with stats like that I think it’s safe to assume that it is REALLY sparkly!