Levon Helm Of ‘The Band’ Has Died (Video) 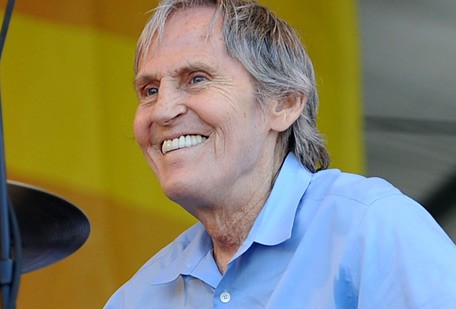 Levon Helm has died – the greatly talented old-timer will be sorely missed.  Levon was a singer and drummer with influential group The Band who backed Bob Dylan in the 60s.  Levon passed away today just two days after his family announced he was losing a battle against throat cancer.

Levon’s family said in a statement:  “Levon passed peacefully this afternoon.”  “He was surrounded by family, friends and bandmates and will be remembered by all he touched as a brilliant musician and a beautiful soul.”

Among those who were last to visit Levon at the Memorial Sloan-Kettering Cancer Center in New York where he was being treated was bandmate Robbie Robertson, who had paid tribute to him earlier this week.

Robbie wrote:  “On Sunday I went to New York and visited him in the hospital. I sat with Levon for a good while and thought of the incredible and beautiful times we had together.”

“Levon is one of the most extraordinary talented people I’ve ever known and very much like an older brother to me. I am so grateful I got to see him one last time and will miss him and love him forever.”

The Band had started as early as 1958, backing singer Ronnie Hawkins, and incarnations of the group played and recorded with Bob Dylan between 1965 and 1968, before releasing their debut album, ‘Music from the Big Pink’.  The group – who’s original lineup included Levon, Robbie, Rick Danko, Garth Hudson and Richard Manuel – became synonymous with the hippie generation and played at Woodstock festival, and are best known for their hits ‘The Weight‘ and ‘The Night They Drove Old Dixie Down’.

As a member of The Band, Levon was inducted into the Rock ‘n’ Roll Hall of Fame, received a Lifetime Achievement Grammy award and appeared in Martin Scorsese’s concert film, ‘The Last Waltz’, documenting the group’s last  performance before their original line up split in 1976.

The Band later regrouped, but stopped performing for good in 1999.  Levon won the Grammy Award for Best Americana Album in 2010 with ‘Electric Dirt’ and again earlier this year for his live album ‘Ramble At The Ryman’.