Liam and Chris Hemsworth Prepare to Do Hot Sexy Battle 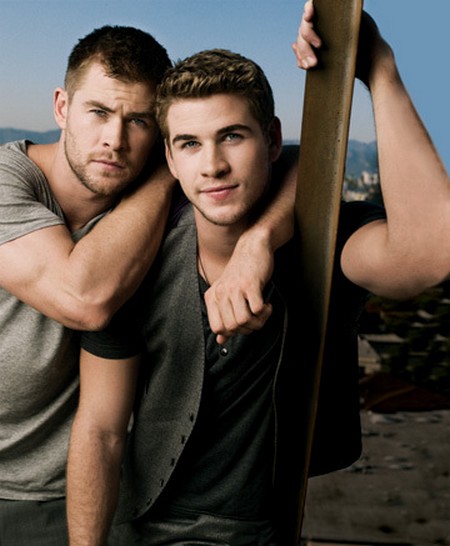 Hang on to your seats ladies, as you are about to witness the sexiest sibling rivalry ever, and it’s all thanks to Robert Downey Jr!  At a news conference for the upcoming Avengers movie, Downey Jr. taunted cast mate Chris Hemsworth, 28, about his little bro’s Liam Hemsworth’s box office success with The Hunger Games.

According to USA today, Downey asked Hemsworth—who plays Thor in the franchise –  “Don’t you feel that Liam is trying to take over your box office universe? Doesn’t he need to be corrected in some way?”

The Hunger Games has already banked $337 million dollars and counting, a pretty lofty goal for the Marvel comic based movie to try to overtake. Still, the older Harmsworth is certainly going to try.

“There’s a special race at the box office,” he admitted, responding to Downey Jr’s remarks adding that he’s still letting his little brother know who’s boss. “He’s got a few bruises, currently, from me,” he joked.

It seems the two blond bro’s aren’t taking this rivalry too seriously as Liam was spotted visiting Chris at the Four Seasons Hotel in L.A. a few hours after Thursday’s press conference.

The Avengers is set for release May 4th and also stars Scarlett Johansson, Mark Ruffalo and Samuel l Jackson.

While I can’t say who is hotter—I would like to see both brothers with their shirts off – one thing I do know is that Chris definitely has the upper hand by not being tethered to a ticking time bomb like Miley Cyrus. Chris should stop focusing on beating his brother in the box office and start dishing out some brotherly advice, stat!