Lindsay Lohan Denies She is Still Lesbian or Bisexual – Is She Over Samantha Ronson? 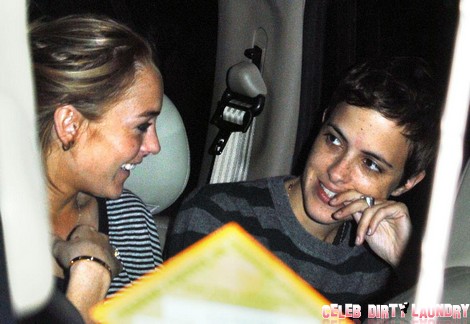 Once upon a time, when television shows like Queer as Folk and The L Word were all the rage, and the era of homoeroticism came to a standstill and gender became a swear word, a young woman who goes by the name of Lindsay Lohan met another lovely young woman named Samantha Ronson. Oh how they frolicked in the gardens of Good and Evil and traversed the streets of Los Angeles, buying grape snow cones and drinking water in slow motion. Fairytales, unfortunately, do not last, no matter how many Taylor Swift songs you listen to.

In this kingdom of free love and Carpenters’ songs, Lohan and her Ronson were ambushed one fine morning by Orc-like paparazzi and the evil Queen of Botulism, Dina Lohan. The kingdom soon fell and Lohan was struck down by a curse that would never, ever allow her to never, ever have fame and fortune again. Instead, Lohan’s guilty plea turned into an insanity acquittal and she was allowed to exist on the nether-planes between Lifetime television movies and Razzie Awards. The Princess of Hollywoodville was no more, and her first love, Samantha Ronson, leapt into bed with post-Lohan fame, never to be seen or heard from again.

According to Mike Walker at National Enquirer, Lohan was once again privy to a flickering halo of her former self at a trendy Los Angeles club a few days ago, when a girl with the oceans in her eyes and the stars beneath her feet flirted with the former Princess of Hollywoodville. The girl – we’ll call her Pocahontas – bought Lohan a most beautiful alcoholic drink, but Lohan politely declined and went on her merry way. Later, when Lohan went to the girl’s room to apply blush to her death-stricken face, Pocahontas stroked Lohan’s arm and said in her best Fifty Shades voice, “Lindsay, I’ve been staring at you all night. You are so beautiful! I want to go out with you. I think we’d be a great couple.” Lohan replied in her best The Shining voice, “Thanks for the compliment, but I’m not into girls anymore. That was just a phase I was going through.” It ended as abruptly as it began, but word on the street is that Pocahontas was found in her bedroom a few hours later. The scene, described by National Enquirer fairies, was devastatingly maudlin.

“Let me speak, let me spit out my bitterness/Born of grief and nights without sleep and festering flesh/Do you have eyes? Can you see like mankind sees? Why have you soured and curdled me?” Joni Mitchell’s scratchy record trailed off into the distance and stopped near the second verse like a scream before a serial killing. Pocahontas’ teary-eyed face stared into the distance as she whispered, “Lindsay Lohan does not love me…”

No, dear Pocahontas, Lindsay Lohan does not love you. She loves one thing, and one thing only – fame, fortune, and scandal. It’s part of her curse. It’s woven into the very fiber of her alcohol laced skin. It’s in her genetics, and in her eyes. It is who she is. Phases, shmazes, Lohan loved Ronson like Michelangelo loved the Sistine Chapel, no matter how many times she says otherwise. It’s a pity, really, to realize that the human condition and the everlasting tribute to romance and love could so easily destroy the pockmarked path of a world famous celebrity.

Goodnight and good luck Lindsay, because your curse has only just begun.