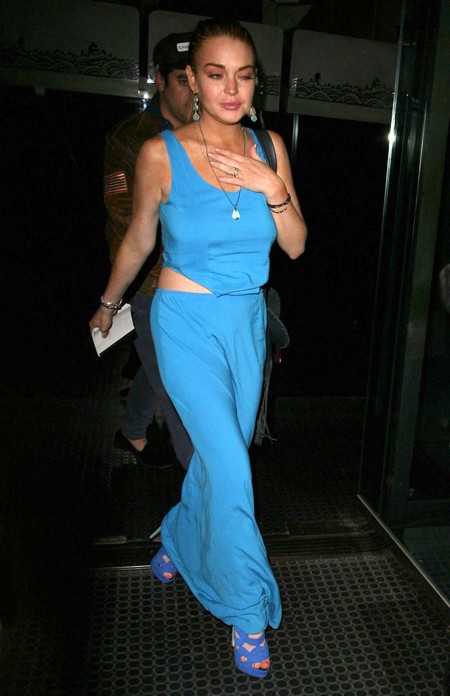 Lindsay Lohan doesn’t strike me as someone to be overly shy when it comes to posing nude – she did after all just pose for Playboy. So why is Lindsay acting like such a prude? Well I suppose it’s not so prudish when you’re uncomfortable being naked on set and a whole crew is watching you.

Lindsay was reported to be a wee bit uncomfortable showing her assets while filming her latest movie, The Canyons. The 26-year-old starlet (and sometimes troubled/hopefully reformed hot mess) was all set to shoot a scene that required her to be topless, but became uneasy about it when push came to shove. The solution? The actress requested that the 10-man crew help her out – by taking off their pants!

According to the New York Daily News, Lindsay asked the crew to strip down to their skivvies while they shot the scene. The crew happily obliged, and after the scene was shot they went back to business as usual and hiked up their trousers.

Lindsay’s publicist said, “The cast and crew have been very understanding about the sensitivities around filming certain scenes.”

Understanding indeed! Nice crew… I wonder if they get paid extra for being so kind?

The movie has Lindsay playing an ex-model alongside adult film actor James Deen. I bet having him there might have helped just a wee bit…have you seen him? The movie is set to finish filming this week, I don’t know if it will be Lilo’s comeback movie but I’d see it just for her co-star.