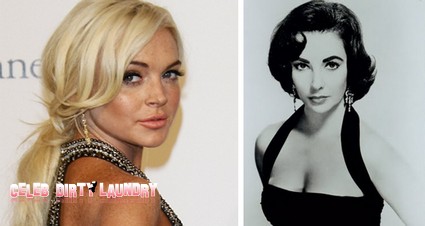 Lindsay Lohan is in talks to play Elizabeth Taylor in a new film that will chronicle her tempestuous love affair with the great British actor, and her husband – twice(!), Richard Burton.

This film will be a made-for-TV production done as part of Lifetime’s 2011-12 schedule – with Larry Thompson at the helm.

Lindsay’s acting career could not have started more auspiciously – she was a child star in films like Freaky Friday and The Parent Trap but her bad behaviour and its legal consequences have left her with nothing better to do than pornography – posing nude in Playboy has to be seen as a pathetic and sordid outcome for a once promising talent. Between jail and rehab Lindsay has not been a particularly tempting prospect for studios in the last few years.

The film, ‘Elizabeth & Richard: A Love Story,’ tells the story of what was the most highly publicized and notorious love affair of its day. Elizabeth and Richard, both at the top of the A-list, had substance abuse problems and were prone to public displays of rage as well as emotional outbursts. You can imagine how the media and the public gobbled it up. Today there is no Hollywood couple of their stature who equal the crazy drama they generated.

If the project goes ahead with Lindsay it will be her first acting role since she appeared in 2010 movie ‘Machete.’ And her role in ‘Machete’ was nothing but sexploitation.

Do you think that Lindsay can ever make a comeback? Let us know in the comments below.