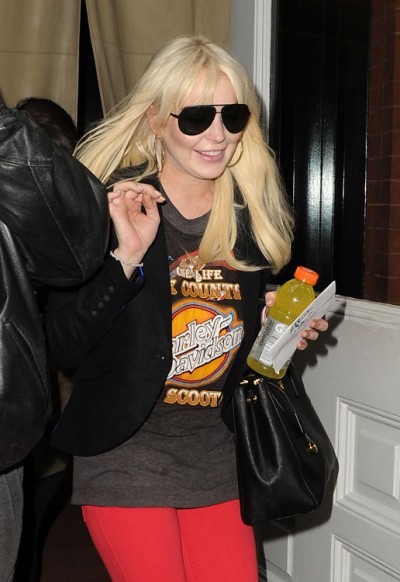 Lindsay Lohan’s horrible, Rosie O’Donnell-hatin’ performance on Saturday Night Live was thanks in part to her taking prescription pills, her father, Michael Lohan says. The other part has to do with the fact that she’s a complete mess and couldn’t remember her lines and stalked the cue cards like they were Samantha Ronson out on a date with another girl. But that’s neither here nor there.

Lindsay needs an excuse for her terrible hosting gig and her daddy is going to give her one. He told Celebrityviplounge.com, “I have to say this… on SNL, Lindsay was not using any illicit drugs or drinking, but is still on the prescription drugs that they gave her. And the meds that they give her are meds that they say she needs, but she doesn’t need them. But they kind of make her flat. She’s not acting at a full potential. It’s like the screen is down over her.”

But that doesn’t mean her career is over. Michael goes on to say his daughter is on the up and up despite the pills keeping her down. “And now when she did Glee I said, ‘Linds, get off the damn medication and let people see who you really are.’ And for a couple days before Glee, she went off this stuff. And there were tears in my eyes when I watched Glee. THAT was Lindsay. Yeah that was her acting. That is Lindsay Lohan at the Parent Trap, Freaky Friday and Mean Girls potential. That is what she was.”

When Michael says he talked to her are we supposed to believe they were in the same room or can we picture him drunk in his boxers, pleading with the television screen while Freaky Friday plays on repeat? Because that seems more believable to me.

Oh, he might be a crazy, attention-seeking famewhore ONLY eclipsed by the likes of his ex-wife, Dina Lohan, but I don’t blame Michael for saying these things about his daughter. It’s actually kind of sweet though he should probably keep it to himself that his daughter is a pill popper. Because we really didn’t need to know this. It’s quite obvious Lindsay can act so when she shows up all cracked out on live television, it’s easy to guess something’s up. That’s the problem. There are a lot of functional dumbasses in Hollywood. Lindsay’s just not one of them. She can’t handle her shit and lays it all out there for all to see because she likes the attention.

We’ll have to wait and see if Lohan puts down the bottle long enough to finish shooting her Lifetime comeback vehicle, Liz and Dick. She recently got her actor to play Richard Burton so maybe she can heed her father’s advice and lift the screen from her eyes. Hopefully, she will lift the jaded screen from mine. Do you think she will or is this just another Lohan disaster waiting to happen?