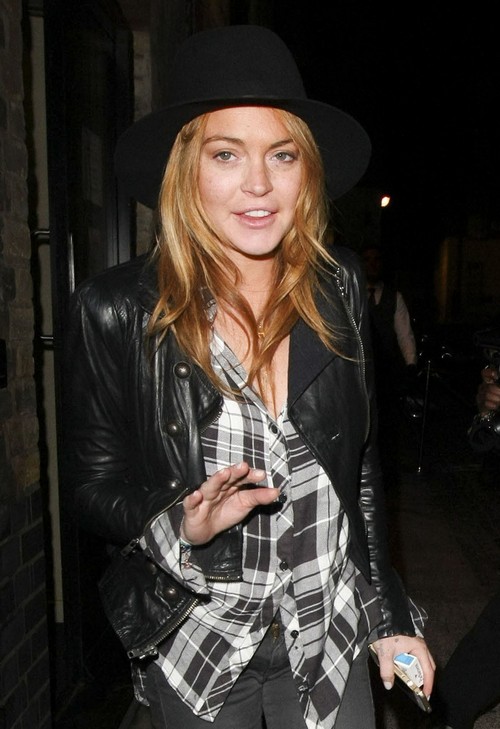 I guess posting nude for Playboy did not bring Lindsay Lohan enough attention so yesteday Lindsay tweeted the above racy ad to her official twitter account.  The ad is for a new fragrance by  FCUK and Lindsay posted it with the message, “this is me lol…. my best friends of years didn’t even know lol – but yes, it is haha”

FCUK has chosen Lindsay as the new face for their new fragrance Friction.  From the FCUK website about the fragrance:  fric-tion noun \’frik-­?shen\

what better way to describe a fragrance that generates so much heat?  fcuk has once again shocked, amused and provoked buzz worthy chat with friction, the newest fragrance duo to join the bold and seductive fragrance dynasty. fcuk friction is an alluring blend of fresh citrus, sensual musk and warm woods – scents with addictive notes that pique all five senses and leave you begging for more.

The fragrace is for her at $75 for 100 ml and described as ‘an ultra feminine mix of hypnotic fruity florals and tantalizingly seductive vanilla that penetrate the senses. its velvety coconut and sensual warmth will keep him coming back for more. ‘   It is also for him at $65  for 100 ml and described as a ‘combustible mix of tingling citrus essences, molten amber and smooth musk that radiates from the skin. this explosive and masculine scent is an addictive and sensual woody fragrance, guaranteed to turn heads.’

Would you buy a fragrance with Lindsay Lohan as the face?  What do you think of the ad?  Meanwhile Lindsay got herself inked again.  Lindsay’s new tattoo is said to be a lot smaller and she had it tattooed on her wrist.  It says, ‘live without regrets.’