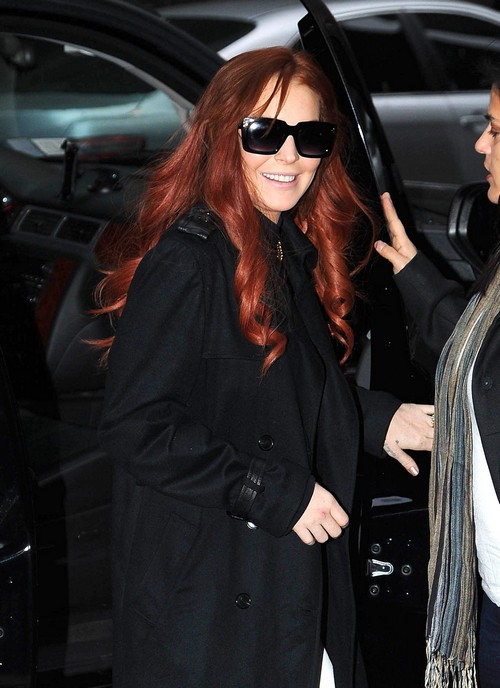 Someone is going to be eating their turkey and dressing inside a jail cell this Thanksgiving.   Rumor has it that Lindsay Lohan will have her probation revoked and will go straight to jail when she goes before a judge this week.  After all the bad reviews of her Liz Taylor biopic I’d want to disappear for a couple of months too, but sadly she’s not checking in willingly.  No, Lindsay, who was on probation for jewelry theft, was involved in a car wreck this past June.  She initially told police offers that she was not driving; however her assistant recently came forward and admitted that Lindsay was in fact behind the wheel.  You’d think they would have figured that out from the seat belt bruise across her collar bone.

Lindsay broke the terms of her probation by lying to the police officers about who was driving.  All because this entitled whore couldn’t own up to what she had done, she will be withering away in the county jail.  Oh, Lindsay.  When will you learn?  Of course, let’s not kid ourselves.  Yes, she will most definitely be going to jail, but the rich and famous don’t do real time for minor offenses.

My guess is she’ll do about 45 minutes to an hour in jail and then they will release her.  She’ll be on probation once more.  Free to booze and coke up with mother of the year Dina Lohan.  Or perhaps she will have an epiphany while serving time and realize that maybe she should get to know her new baby sister.  You know, the one she swears she didn’t know about that is now 17 years old.  Ahhhh, family dysfunction at its best and all being played out for the masses to enjoy.

Lindsay, if you spent as much time being a decent human being as you do on your back or pretending to be gay, then maybe you wouldn’t be so delusional as to believe that people are out to get you just because of who you are.