Lindsay Shows Up Late For Glee After A Night Spent Partying 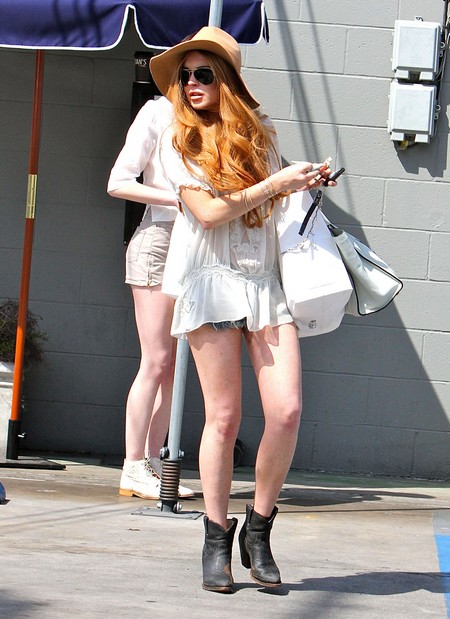 Lindsay Lohan is up to her old and new tricks partying and neglecting her work.  The wayward Lindsay showed up late for guest appearance on ‘Glee’ this morning after spending the night out partying.  Apparently Lindsay is not heeding Judge Stephanie Sautner’s warning to stay sober and focus on work – stop partying the judge told Ms. Lohan with obviously zero impact.

It seems that Dot Marie Jones was pissed off tweeting with an implication that Lindsay’s late arrival was ‘not cool.’  No kidding – Lindsay is a selfish egotistical freak who thinks she is really special.  Let he stick to Playboy centerfolds and leave the acting to people who care.  We seriously hope that the producers of ‘Liz and Dick’ get rid of her.  She does not deserve to play Elizabeth Taylor.

TMZ has the exclusive: Lindsay Lohan was late this morning for her guest appearance on “Glee” … following a night out on the town.  Coincidence?

Dot Marie Jones — who plays Coach Beiste on the show — tweeted, “Gonna be a long day!!  Some ppl show up late and just throw a wrench in things.  Not cool!  I’d rather be an hour early (I was) than 5 minutes late!”

Dot didn’t say who was late, but we’ve confirmed the person MIA was LiLo.  Now here’s the good news for Lindsay … Sources connected with the production tell TMZ, Lindsay shot her big scenes the other day, and director Eric Stoltz has been saying she was “very professional.”  We’re told she nailed her lines and was very polite to cast and crew.

Lindsay is back on set today just for reaction shots when the kids sing on the show.  We’re told her tardiness did not hold up production.

Lindsay is a train wreck just waiting to happen.  She has been in bar fights lately and her sobriety is obviously in doubt.  It is just a matter of time before she screws up seriously again.