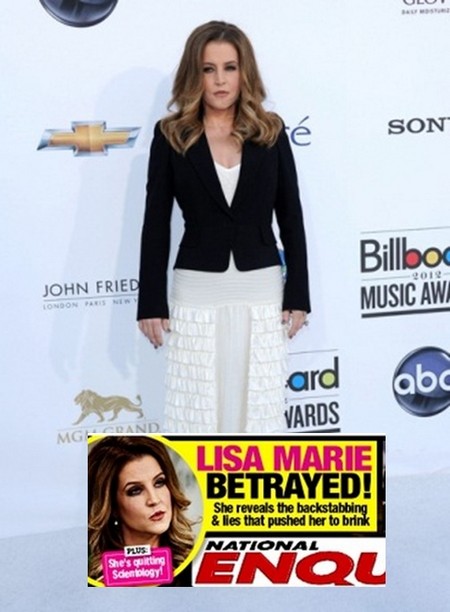 Most musicians sing about relationships gone bad and Lisa Marie Presley in no exception, rather than break-up with a man, Lisa Marie is quitting Scientology.  The National Enquirer reports the only child of Graceland is finally moving out of the house that Xenu built and she’s doing it in typical Presley fashion – in her newest album.

“Lisa Marie removed all mention of Scientology from her website, and the lyrics to some of her songs have caused major speculation that she’s cut off all communication with the church,” revealed a source to the National Enquirer.

In one song, Lisa Marie also uses the words “transgressive” and “suppressive” which, apparently, are code words for people who are negative against the church.

It’s been a bad couple weeks for Scientology with one of its most famous members, John Travolta, caught in embarrassing homosexual sexual assault allegations. Now, Lisa Marie’s exit could have even more considerable backlash. The secretive, enigmatic religion boasts A-list star converts such as Kirstie Alley, Kelly Preston and Tom Cruise and sources believe Elvis’s daughter’s departure could start a domino effect.

“I think Kirstie has one foot out the door, and Kirstie and Lisa are two hearts with one beat,” said Californication actor and former Scientologist, Jason Beghe.

This wouldn’t be the first time someone left Scientology with a bang. Oscar-winning director Paul Haggis was a member for 30 years and now speaks out openly and harshly about L. Ron Hubbard and those thetans even being interviewed about it for the New York Times.

So I just wonder why after all these years, Lisa Marie is moving on. Perhaps all the alleged violence and anti-gay sentiment found in L. Ron’s teaching finally got to her. Or maybe she woke up and realized her problems aren’t caused by the spirits of space aliens stuck to her body. What do you think? Is this just another Scientology conspiracy or has Lisa Marie really returned her belief to sender?