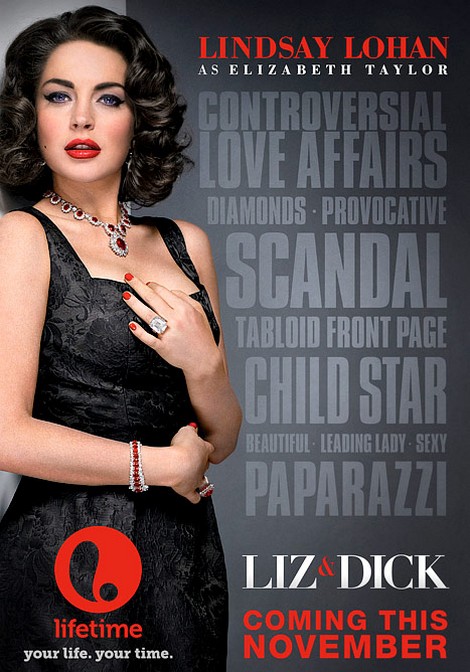 Lindsay Lohan sure knows how to keep herself in the news although probably not exactly in the manner she’d prefer.  Lindsay wants to be a Hollywood star – the type with a star on Hollywood Boulevard not a scandal-plagued celeb supporting herself by getting undressed for Playboy or offering favors to rich male friends.  So this goal of Lindsay’s, being known for her talent, requires that she sober up occasionally and try to act – preferably in major Hollywood productions.

Okay, so Lifetime’s Liz & Dick isn’t exactly James Cameron’s next blockbuster but it still beats mooching dinner off of Woody Allen.  Especially when Woody’s wife/daughter/nurse insists on accompanying the old incest-loving pervert on the date.  After all no woman in her right mind would leave their RICH old lecher husband alone with Lindsay Lohan, would they?

So despite much trouble with the cops and courts Lindsay managed to find some time to film Liz & Dick.  Of course there were various little hiccups during production, but nothing out of the ordinary for our Lindsay.  Some of her little imbroglios included a 911 call for an alleged overdose when she appeared to be comatose in a hotel room, a crazy collision with a truck after which Lindsay bribed the truck driver to lie to police, fights at bars, the usual.  And all this was after silly Judge Stephanie Sautner warned the little Kracken to stop partying and concentrate on her career.  Words to the wise.

So now Liz & Dick is in the can – what an apt term for this film.  Elizabeth Taylor’s horrified family protested in vain at having the wretched Lindsay play their esteemed relative.  But Lifetime figured that Lindsay’s disgusting reputation would bring viewers – and all that counts in Hollywood is money – nothing else whatsoever.  If you’ll watch it and they can sell advertising for it then they’ll  produce it.  The free market at its best.