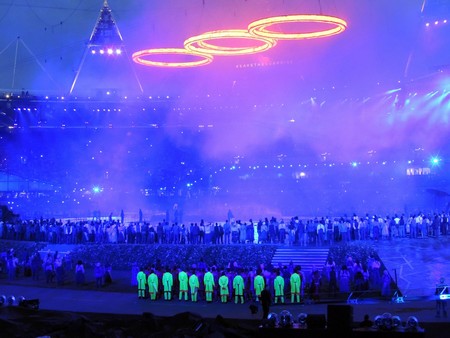 Everyone around the world has been tuning into the London 2012 Summer Olympics – especially when it came to the spectacular Opening Ceremonies. I’m not one to go into huge detail with regards to sports – but this is quite an interesting story.

Apparently a ‘mystery woman’ crashed team India’s entrance during the opening ceremonies, and upon looking at the photo you can tell that she did not belong. The unknown woman is Madhura Honey, a postgraduate student hailing from Bangalore. She was one of the volunteers who had been part of the cast of the show and became “over-excited” and jumped into the parade alongside team India. Am I the only one who finds this incredibly odd and ridiculous?

Other news to report, France won the men’s 4×100 freestyle relay today, coming from behind on the final 50m behind the U.S team which included Michael Phelps and Ryan Lochte. Shame the American boys didn’t win – but let me just say that watching those boys remove their shirts and dive so elegantly into the world was enough to get my blood boiling. Very, very enjoyable to watch…uh, the swimming too.

Olympic organizers are also scrambling to figure out why there is an abundance of empty seats in the stands – leaving fans wondering why the attendance is so low and who is not using their precious tickets. It’s been reported that troops, teachers, and students are getting free tickets to fill prime seats so the stadiums don’t look so barren. Umm…I’ll go if you’re looking to fill them? I’ve also got lots of London mates who I’m sure that would be happy to take part as well? Just saying