BY Danity Donnaly on June 19, 2012 | Comments: one comment
Related : Television 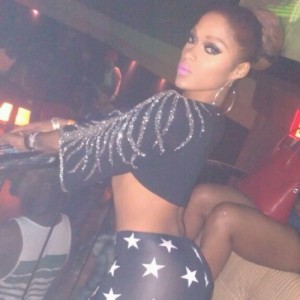 Love and Hip Hop Atlanta’s Stevie J is making the news with his open affair with stripper-turned-singer Joseline Hernandez, MediaTakeOut reports. But this isn’t the big shocker. Rumor has it that the cast members strongly believe that Joseline could be a tranny!

You Love and Hip Hop fans know that Stevie J has been with Mimi Faust for fifteen years. Not only that but the guy has a little girl named Eva with her!

Steviee J, who used to produce for Diddy, is under fire after the premiere last night for being a cheater and Joseline is being called a homewrecker!

Towards the end of the last night’s premiere, there was a witness who saw that Stevie J may have kissed Joseline, which gets Mimi very upset, demanding answers from her man. It was at that point that Joseline gets mad that Stevie is chasing after his wife and not her! She then whips a drink at him and then Joseline and Stevie J get into a war of words as well. Talk about a hot mess.

Joseline has been getting quick the backlash via her Twitter page and despite people thinking she is really a man in a woman’s body, she’s firing back.

Via her Twitter, she writes “Fuck u haters. I’m still Gona get payed for ever. I’m an artist fuck what y’all say. I’m international baby u bums ain’t got a passport.”

According to Joseline, she knew nothing about Stevie J’s relationship with Mimi. She said, “No. I didn’t know about Mimi. He didn’t say anything about being in a relationship. He pretty much told me, ‘I have a baby momma,’ but Stevie has how many baby mommas? Four? So I didn’t think of anything like that. She was just a baby momma. To me, she still a baby mom.”

All I have to say is Love & Hip Hop is about to get very interesting with Stevie J’s affair thrown into the mix. And is Joseline Hernandez a real tranny?!!!!