Lovebirds Jennifer Lawrence and Nicholas Hoult Looking ‘Hungry’ For Each other.. (Photo) 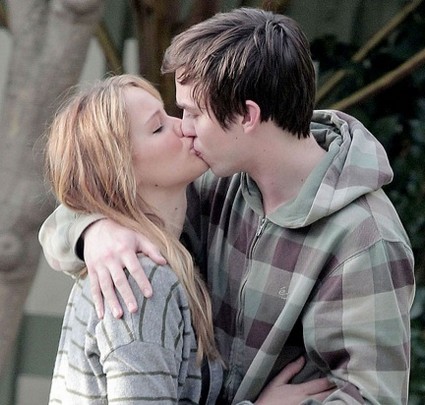 You know how the story goes, two young up and coming actors meet on set. They become fast-growing friends and keep it serious while filming whatever said project they are working on. Then once filming is over, we see them out and about together, and then a little bit more. Rumours swirl, but yet they claim to be ‘just friends’. Sound familiar?

Well such is the case for Jennifer Lawrence, 21, and her rumoured beau Nicholas Coult, 22. Ever since the two filmed X Men: First Class together, they’ve been pretty cozy. It’s no wonder that the two want to keep whatever puppy love they have under wraps, as Jennifer’s new movie, The Hunger Games opening on March 23rd is sure to skyrocket her career and notoriety – if it hasn’t already. Won’t be as much privacy for either of them I’m afraid.

They’re still pretty adorable. The two shared a kiss together this week in L.A and looked pretty happy and down to earth. It also appears that Jennifer has gone back to her original blond locks, while the About A Boy star is cute and casual. I like the laid back look kids, keep it going!