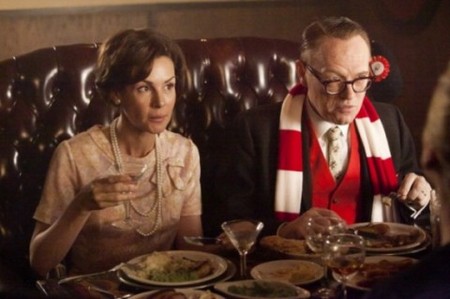 A new episode of AMC’s hit show Mad Men airs tonight on AMC.  Tonight’s episode is called ‘Signal 30.’ Stand by as we cover the episode with all the up-to-the-minute details.

Tonight on AMC a new episode of Mad Men shows that Lane has been making friends — and an interesting friendship ensues. Meanwhile, Pete gets the spotlight as he entertains guests. The episode is directed by John Slattery who plays Roger on the show.  This is not the first time John has directed.  He directed two episodes in season 4 or Mad Men.

John had this to say about tonight’s episode: “I was given a script that’s a little gem. For eight days, it was mine to work with. They trusted me with it. I made choices and interpretations. The script was one of the best I’ve read – and I’m hopeful it turns out as well.”

Signal 30 is police code for a fatal car accident, so I am wondering if someone gets into a car accident on tonight’s show.   Pete has been talking about learning to drive so you never know.  We will find out tonight!

The show begins with a classroom of students watching a film–there’s a car crash in this film. Pete, eyeing a young girl sitting in front of him, is sitting in the back of the classroom.

There’s a board meeting. Lane announces a new advertising venture with Jaguar.

Pete invites Don and Megan to a house party. Don really doesn’t want to go, but Megan convinces him that it will be fun.

Kenny’s sci-fi writing is on the upswing.

Roger gets excited about the new Jaguar venture and offers Lane some advice before his dinner, so he can score big.

Don chats with Trudy, desperately trying to get out of this dinner party. She says the entire party is based around him and threatens that she’ll reschedule if he skips out.

Pete hits on a teenager while taking driver’s ed classes (he never learned to drive because he grew up in Manhattan). He and this girl start flirting in the hallway. He asks her out. She asks “who’s going to drive.” And Pete says, “We’ll take turns–give each other lessons.” Gag me with a spoon.

Don and Megan prepare for Trudy’s party. Megan says it will be fun and urges him to try and find friendly conversation with another couple.

Megan and Don arrive at the party. Dons tells Pete and Trudy that they have a lovely home. Megan brought brownies. The women head off into the kitchen to “devil” some eggs, leaving the men — Pete, Ken, and Don — to chat.

Lane heads out for his dinner, desperately trying to make a good impression with the firm’s future client.

The dinner portion of the dinner party begins. Megan goes on and on about how beautiful the suburbs are, but Don says otherwise. Cynthia slips and reveals Ken’s secret sci-fi writing life; they’re all not sure what to think. Everyone leaves the table except the Ken, Don, and Pete. In the kitchen, the sink breaks and water starts flying everywhere. Don fixes the sink.

Megan and Don drive home. Don makes a move on Megan while she drives. “Let’s make a baby,” he says with a laugh. They pull over and start kissing.

Roger comes into Lane’s office and asks how the dinner meeting was. Roger and Pete suggest that they go to the next dinner so they can attempt to close the deal, since Lane has trouble in that area.

Don, Roger, and Pete all dine with Lane’s prospective client. The client says that he has every intention of giving him their business and he says he’d like to have a little fun. Roger offers that they all go to a party. Roger and Pete and the client all get lured into girls’ bedrooms. Don is seduced, but he doesn’t take well to the seductresses’ ways. The client had a good time.

Don and Pete end up in the cab together; Pete definitely feels guilty for sleeping with another woman.

Pete gets home later that night, looks at Trudy, who’s sleeping, and then he jumps in the shower.

Roger finds out about Ken’s writing and is not happy — he basically says he should give it up because his attentions are divided.

Lane walks into the boardroom and asks Joan to leave. Lane says that the guys, in their attempts to secure the account with Jaguar, actually ended up screwing it up. They lost the account after the client’s wife discovered he’d slept with another woman at the party. Lane, in a fitted outrage, starts fighting Pete. They duke it out in the boardroom. Lane knocks Pete out; he gets up and walks away with a bloody nose. The meeting is rescheduled.

Joan comes into Lane’s office to comfort him. She brings him a bucket of ice. Lane kisses Joan. She gets up and opens the door. He says he’s sorry, that he’s made a fool out of himself more than once today. She says, “What for? Everyone’s wanted to to that to Pete.”

Pete runs into Don. Pete says, “I have nothing, Don.” And starts to cry.

Despite Ken’s promise to stop writing, we see him writing at the end of the episode. He narrates the final scene with his story, which basically tells of how “broken” and incomplete everyone is.

We see Pete back in Driver’s ed. He watches his crush get intimate with the boy from earlier.

Let us know what you thought of the episode! We want to hear from you!