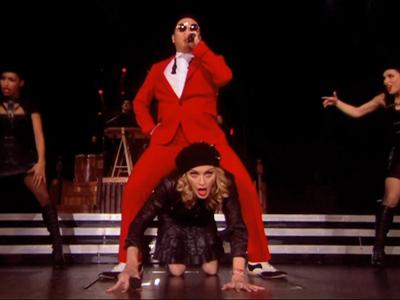 A mash-up between Madonna and Psy is the equivalent of being burned by a raging pyromaniac, put out by a water balloon, and then being burned again by Bruce Jenner on a psychotic midnight run. During a recent Madonna concert, the pop queen fader was joined on stage by Psy, the mastermind behind the ultra-successful mega-hit, Gangnam Style. This would have been cutesy and very Glee-esque, if it weren’t for a tired looking and outdated pop star trying to ride off the back of one of the biggest pop hits in modern music history. Dude, be Like a Virgin or something and stop pretending like your career is still what it used to be.

In the horrendous four minute video, Madonna introduces Psy by moving around on stage and gyrating to her song, Give It To Me, like an elderly woman with an incontinence problem. After an awkward few seconds, she introduces Psy by doing the first part of Gangnam Style. He suddenly appears on stage like a campy pimple on the forehead of Dancing with the Stars’ Bruno Tonioli. In his orange suit and decked out glasses, the South Korean pops the energy like a quantum physicist at CERN, but the “sexy lady” that is Madonna, falls far behind in trying to look as cool as Psy.

During the breakdown part of the song, Madonna twirls like a leather clad zombie ballerina and pops her right leg to the beat of the music. She proceeds to move around Psy and do a backward tiger crawl under his legs. She then appears behind him, out of breath, out of touch with reality, and out of superstar appeal. It changes up, and the cooler than ice Psy does the same tiger crawl under the witless Madonna.

The mash-up might have worked, yes. It might have been the hottest performance in the history of humanity. Unfortunately, neither Madonna, nor the image of her Che Guevara costume, nor Psy’s orange (or is it tangerine?) suit could have saved this megalomaniac disaster. Hit the drawing boards again, boys and girls, because one more second of this horror and we’ll be forced to quit our jobs and take up the position as head mental patient at the local psychiatric ward.

What do you think? Do you think the video is worthy of praise? Let us know your thoughts in the comments below.  CHECK OUT THE VIDEO HERE!