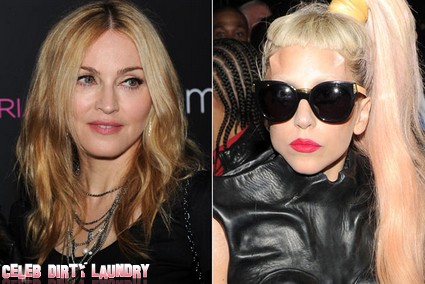 Madonna stuck the knife into Lady Gaga by implying that ‘Born This Way’ is a ripoff off Madonna’s ‘Express Yourself.’ Madonna is not the first person to express the opinion that Gaga veers too closely to The Material Girl’s work, too often. But in an interview with Newsweek Madonna herself makes her thoughts public and if one reads between the lines she is calling Gaga a thief.

There is no denying that “Born This Way” is similar to “Express Yourself” and in the interview with Newsweek, Madonna had this to say when she first heard Lady Gaga’s song: “I thought, ‘What a wonderful way to redo my song’,” adding, “I mean, I recognized the chord changes. I thought it was … interesting.” There is nothing nice implied that word ‘interesting.’

Madonna also made not of the similarity between her own and Gaga’s oeuvre with Graham Norton recently – saying: “When I first saw her I was really impressed by her and she was cool. She did remind me of me back in the day.” Talk about a backhanded compliment… .

Lady Gaga has been belligerent in her anger and denial that she copies Madonna calling such accusations ‘retarded’ and saying: “Just because I’m the first f***ing artist in 25 years to think of putting it on Top 40 radio, it doesn’t mean I’m a plagiarist, it means I’m f***ing smart. Sorry.”

But as Queen Gertrude says to Hamlet: “The lady doth protest too much, methinks.”