Madonna Is Eager To Start A War With Lady Gaga — Feud Erupts! 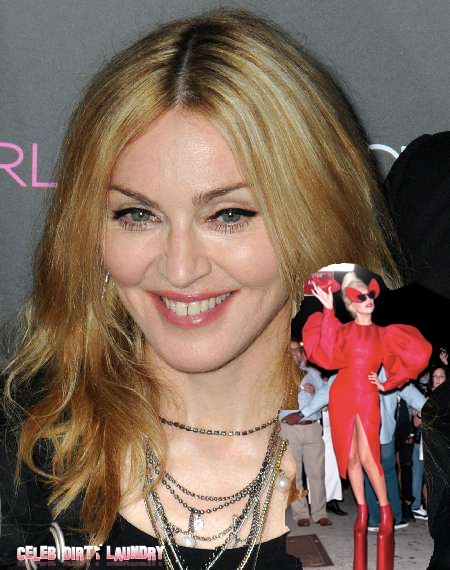 The story claiming that Lady Gaga’s “Born This Way” is a rip off of Madonna’s song “Express Yourself” began circulating in early January. Madonna told ABC News, “When I heard (Born This Way) on the radio, I said that sounds very familiar. It feels reductive. I thought, ‘this is a wonderful way to redo my song’.”

When Gaga was asked about the familiarity between the two tracks, she quipped, “I will look you in your eyes and tell you that I am not dumb enough or moronic enough to think that you are dumb enough or moronic enough not to see that I would have stolen a melody. . . If you put the songs next to each other, side by side, the only similarities are the chord progression.”

Madonna is set to kick off her massive world tour on Thursday in Tel Aviv, Israel and during rehearsals she was taped performing Lady Gaga’s “Born This Way”. She begun with performing her hit “Express Yourself”, seamlessly transitioned into “Born This Way,” and ended with her track, “She’s Not Me”. Many fans and industry insiders view this as a personal attack against Gaga, rekindling the feud.

Madonna referenced Gaga in a recent interview, “She’s a very talented artist. I certainly think she references me a lot in her work. And sometimes I think it’s amusing and flattering and well done. [Her songs seem to be a] statement about taking something that was in the zeitgeist, you know, 20 years ago and turning it inside out and reinterpreting it.”

Gaga’s Lil’ Monsters have taken to Twitter and have lambasted Madonna for her very controversial move, with some even falling into severe depression. Gaga’s cult status has geared up her fans for a full-blown war against Madge’s minions — both sides have taken up arms.

Both of these artists have achieved some of the biggest goals in the history of popular music, with Madonna reinventing herself along the way and Gaga being super controversial, standing up for LGBT pride, among other things. Madonna’s recent album sales have dwindled, with many critics expecting the worst. Gaga has been going from strength to strength, gripping the world with every new single release.

Is this a case of Madonna’s sour grapes? Or is Gaga actually a secondhand Madonna? Both of these artists have the most influential careers in the history of entertainment and one wrong move by either of them, will send the feud into a full blown nuclear war.

Put your paws up Monsters, Madge might go Gaga.