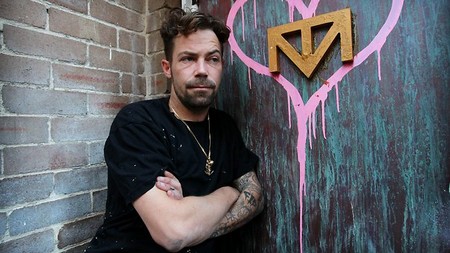 Madonna is being accused of stealing the ‘M’ symbol for her new Truth or Dare perfume line by RJ Williams, an artist from Sydney, Australia.  Williams claims that that Madonna has breached his copyright of the symbol that he has been using for 8 years and trademarked last year.

Williams has sent a letter to Guy Oseary, Madonna’s agent demanding she stop infringing on his copyright, pay him all profits made so far on the perfume, and enter into an agreement with him for future use of his trademarked symbol.

He’s the Sydney artist brave enough to take on the Queen of Pop.

RJ Williams, whose pieces have hung in the corridors of the Art Gallery of NSW and Museum of Contemporary Art, is taking legal action against US singer Madonna over what he claims is a breach of copyright.

The 32-year-old says the “M” symbol used on the singer’s new Truth or Dare perfume, launched last month, bears too much of a resemblance to the symbol he has been painting and using on clothing for eight years and which he trademarked last year.

“Friends from all over the world have been calling me upon seeing the Truth or Dare by Madonna campaign to express their disgust and support,” Williams told The Sunday Telegraph.

“It’s about my integrity as an artist.

“I do not think it should be able to be used by a giant cosmetics company.”

Last week, Williams sent a legal letter to Madonna’s agent, Guy Oseary, requesting the star immediately stop infringing his copyright, provide him with all profits made so far and enter into a licence with him for future use of the symbol.

Is Madonna guilty here?  Should she simply take what she wants from whomever she likes because she is the great Madonna?  Let us know in the comments below.