Magic Mike Is In Jail! 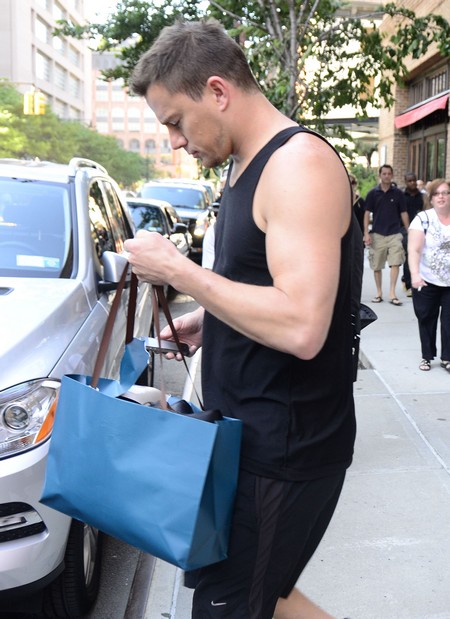 Magic Mike is in jail we have learned. The man upon whom Channing Tatum’s character in the movie, ‘Magic Mike’, is based graduated from taking off his clothes for money to selling illegal drugs. Apparently Michael Angelo Sorrentino, or Magic Mike, as he was known on stage, is languishing in prison doing an extended term for narcotic trafficking.

From what we know it seems that that Channing experienced only a brief career as a stripper but borrowed liberally from his co-workers to build the Magic Mike character he portrays in the movie.   According to London Steele, the stripper turned nightclub owner who ‘trained’ Channing to strip, Channing and Michael got along but were ‘complete opposites.’

The National Enquirer Print Edition, July 9th has the story: The Enquirer has learned exclusively that 41-year-old Michael Angelo Sorrentino, who worked alongside Channing as a dancer at the Chippendale-style revue Male Encounter in Tampa, Florida, in the late 1990s, is currently behind bars at the Brevard Correctional Institution in Cocoa, Florida.

Sorrentino who has been arrested numerous times for drug-related offenses, went to prison after being busted during a 2009 sting operation in Tampa. He agreed to deliver 70 oxycodone pain pills to an undercover cop at a convenience store parking lot. He’s scheduled to remain behind bars until 2016.

And while ‘21 Jump Street’ Channing, 32, claims the new film is partially based on his experiences as a stripper, his former co-workers say his character Magic Mike Martingano is based on Sorrentino. They’ve also accused him of stealing their stories for the movie!

“He only danced for four months” griped former stripper Thomas Awesome Austin, who claims he gave Sorrentino the magic Mike nickname. “How many events could’ve happened to him?”

The film also stars Matthew McConnaughey whose character Dallas is loosely based on a stripper turned club owner London steel. London trained the then inexperienced 18-year-old Channing to gyrate for eager ladies under the stage name Chan Crawford. He also knew the real magic Mike well. “I took Channing under my wing,” London told the Enquirer in an exclusive interview. “He was shy at first, but he learned how to move and work the crowd.”

“Mike did need any help in that department. He was a wild guy, and natural and very likable. The women just loved him.  Channing and Mike got along, but they were completely opposite. Channing was more reserved until he got on stage. And Mike’s life took a whole different turn than Channing’s. I’m not shocked Mike’s in jail but I’m disappointed.”

So there you have it – the inside scoop on the real Magic Mike – and some info on Channing’s actual experience selling his body.  From what we have seen of Channing’s acting we’d have to say that he is still selling his body.  Face it – the dude has no acting talent at all.  People used to make fun of Arnold Schwarzenegger saying he couldn’t act and that he only made it in Hollywood because of his Mr. Olympia-winning body – well let me assure you that Arnie is a regular Daniel Day-Lewis next to Channing!  Let us know what you think in the comments below.