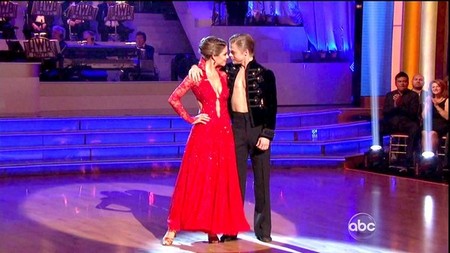 ROUND 2 – Maria Menounos danced the Jive tonight for her first dance as Dancing With The Stars continued with its ninth episode.  The competition is really heating up as the contestants dance for their last chance to get into the finals.  The remaining four couples hit the ballroom tonight with two rounds of competitive dance performances, a Ballroom dance and a Latin dance.  We recapped the tonight’s show for you and if you want to see how all the couples did go HERE!  Did you see Katherine’s performance last week if you missed it you can see it here!

Maria Menounos and Derek Hough, dancing the Jive tonight.  Derek had this to say about their performances tonight, “Everybody that’s left, the final four, it’s the strongest Semifinal that I can remember.  Everybody is so strong. It’s going to be a real tight squeeze in that Final. We’re going to have to bring it. We’re going to have to do some showstoppers this week to make it.”

Judges Comments: Bruno: You really did it. There are always quirky details from you guys. It all worked beautifully, it shouldn’t have but it did. It was great! Carrie Ann:  I noticed you are on it tonight. Perfectly dances.  Fantastic!  Len: It was not a traditional jive, but it worked.  You had a little stumble, watch the tape you will see, but WELL Done!

Watch the video below and let us know what you think? Do you think that Maria did enough to keep her around for another week? Sound out in the comments below!