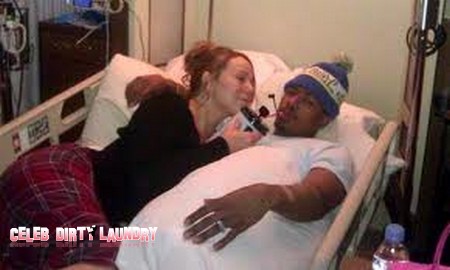 Mariah Carey is asking fans for prayers and support for husband Nick Cannon, 31, as he apparently battles “Kidney Failure” in Aspen, Colorado. The 41 year old singer took to twitter this morning, saying “Please pray for Nick as he’s fighting to recover from a mild kidney failure. #mybraveman.”

With the tweet, Carey uploaded picture of herself smiling next to a very ill looking Cannon in his hospital bed. The couple were in aspen on vacation, but are stuck until Cannon is well enough to travel. “We’re doing OK but we’re stranded in Aspen,” Carey commented. “I know, we could be in a lot worse places, but the truth is as long as we’re together, we’re OK.”

Though Carey looked happy in the twitter photo, she made a statement on her official website saying that she is trying to keep things light, but this health scare is very serious, “We’re trying to be as festive as possible under the circumstances but please keep Nick in your thoughts because this is very painful.”

According to Carey, Dr’s tried to throw her out of his hotel room but did not succeed. She added that this is role a reversal for the couple, “Last year it was me attached to the machines (after having dembabies) and Nick was there with me through it, and now here we are.”

Carey gave birth to healthy twins Moroccan and Monroe April 30th, 2011 via C-section. No word on where the babies are while dad is on the mend.  “We’re doing OK but we’re stranded in Aspen,” Carey added. “I know, we could be in a lot worse places, but the truth is as long as we’re together, we’re OK.”