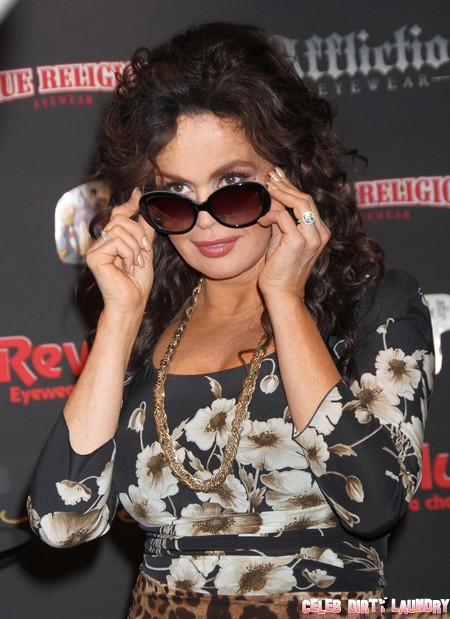 The tormented Marie Osmond is finally opening up about the severe depression she suffered from for the past few years. Marie will be cutting her soul to the core during an upcoming tell-all book about her son’s tragic suicide in 2010, the failure of her first marriage to Stephen Craig, the alleged abuse she suffered at the hands of her second husband Brian Blosil and her life shattering nervous breakdown in 1999.

A source close to the Osmond family opened up to The Enquirer about Marie’s battle with depression, “Marie’s depression got so bad at one point she feared her career would be over or she would kill her­self if she didn’t take drastic steps to cure her misery. So she asked loved ones to check her into a mental hospital for treatment. Not a fancy rehab facil­ity – but an old-time mental ward with padded cells, straitjackets, restraints and electric shock treat­ments. Marie didn’t know what might happen next in her mind and wanted to be in a hos­pital that was fully equipped to handle anything.” One of the side effects of ECT (Electroconvulsive therapy) is severe memory loss and even though the controversial treatment has been known to work in many cases of severe depression and obsessive suicidal ideations, Marie decided against the aggressive treatment. “It was only the fear of being un­able to remember the lyrics to her songs onstage that made her change her mind about undergoing shock therapy and toughing it out on her own,” said the source.

The tell-all book has already caused a divide between her and her Las Vegas performing partner, her equally famous brother Donny Osmond. The source divulged, “The book’s topic is the mental illness of depression and how it can shatter families, but Marie plans to reveal everything about her life struggles, including a lot of things her family does not want exposed.” Marie has overcome her terrible battle with depression and has since become one of the most popular women in the entertainment industry. She has a talk show on the Hallmark Channel, regular sold-out Las Vegas performances at the Flamingo hotel, a new line of dolls sold on QVC, books written by her, handcrafting and her philanthropic work with Children’s Miracle Network. There is no publishing date set for the book, but the source revealed that when it is published, the family will be rocked to the core, “Her family will find a lot in this book to upset them, but Marie has told them ‘I’m 52-years-old and ready to let everyone know the real story about my life. It’s time to finally set the record straight.”

We applaud Marie for her courage, resilience and attitude towards life and we hope this book will seal all of those open wounds. What do you think? Do you think Marie should release this book and bring her family down? Let us know in the comments below.