Mark Wahlberg Strips Down To His Undies (Photo) 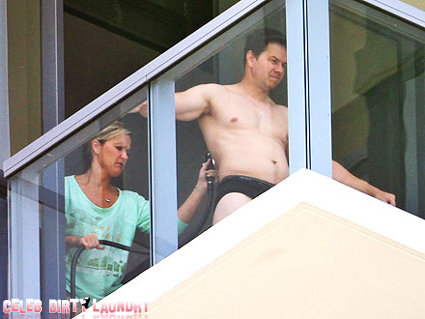 Mark Wahlberg, AKA Marky Mark, was spotted recently in his whitie-tighties (well, they’re black) getting spray tanned on top of his Miami hotel balcony. Based off this picture, it looks like he’s lovin’ it!  Mark Wahlberg is prepping himself for his new movie Pain and Gain in which he plays a body builder. Okay, spray tan and intense workout sessions . . . GTL anyone?  Just sayin’! His new flick is set to come out in 2013 and also stars Dwayne “The Rock” Johnson.

The plot revolves around a pair of bodybuilders who get themselves caught up in an extortion ring and a kidnapping scheme that goes very wrong. Apparently, Michael Bay gave this film a $25 million dollar budget making this his cheapest film since his first feature Bad Boys.

I completely believe this movie will be a success, even when taking into consideration the relatively low budget. Michael Bay is a phenomenal director and this movie has a great cast. Mark was picture perfect in his 2010 movie The Fighter and I have faith that he will be even better in Pain and Gain.

Obviously, I am a Mark Wahlberg fan and think that The Rock is pretty yummy, too. So I will definitely be in line to see this movie. What about you?