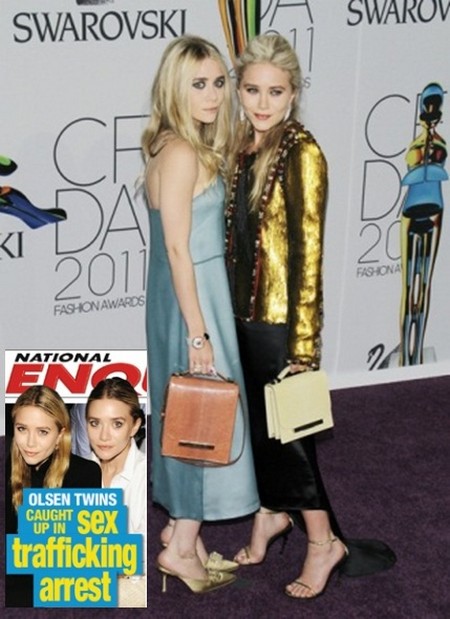 Mary-Kate and Ashley Olsen are at the center of a human-trafficking scandal that officials just blew open. Turns out a bodyguard for the famous twins is one of 14 people who have been arrested and charged for using the services of a father-son pimp operation in New York.

According to The National Enquirer, Dale Araten, 40, was arraigned Monday in Manhattan Criminal Court for allegedly making a lonely call to the sick masterminds, Vincent George Sr. and his son Vincent George Jr. on March 1.

Araten told investigators he runs errands for Mary Kate and Ashley Olsen’s entertainment firm, Dualstar. But this wasn’t the first time he’s been in the thick of a disturbing situation. Araten was also part of the security team that Mary Kate dispatched to Heath Ledger’s SoHo apartment in 2008 after learning Heath overdosed in his bed. Mary-Kate never commented on the events leading up to Heath’s passing but family members of Heath’s have criticized her for keeping mum. The masseuse who found Heath dead called Mary-Kate twice before dialing 911 and her security team, including Araten, arrived at the scene before police.

According to court documents, Araten is maintaining his innocence and told investigators he didn’t solicit sex because he was in Florida at the time. “I’ve been in Miami since March,” he said. “I occasionally let someone use my phone but that hasn’t happened since November 2011.”

This is some shady business. I understand that Mary-Kate and Ashley probably don’t vet their employees, rather their company does, but whoever’s in charge needs to do a better job. This is embarrassing and gross since I’m sure the Full House stars never thought their names would be in the same sentence as “sex-trafficking”.