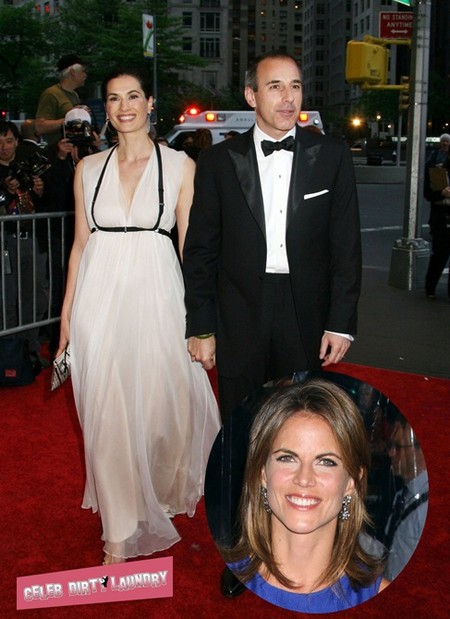 I was waiting for this one. Remember a few months back when word spread like wildfire about Matt Lauer cheating on wifey, Annette Roque, with his sometimes Today Show co-host, Natalie Morales?

Well, some big changes are brewing over at the morning show, with Ann Curry being ousted as Matt’s official co-host and Annette is on the verge of completely losing it.

“When she heard about Ann getting the boot, the first thing she told Matt was that she didn’t want him cozying up any closer to Natalie,” a source close to Lauer’s wife told The National Enquirer.  “In fact, Annette drew a line in the sand and said if he pushed show bosses to make Natalie his new co-host, she’d divorce him. Annette knows Matt is the key to the Today franchise and his bosses will put whoever he wants in the co-host chair.”

Savannah Guthrie is rumored to be the front runner for the job and that isn’t sitting very well at all with Morales. She has been with the morning show for a few years and was said to have been very upset when she was passed over as co-host last year when Meredith Viera left. Insiders are saying that this time around, Morales has threatened to quit if she doesn’t secure the gig.

Who can blame Annette for worrying when not only was her accused of cheating but it was also insinuated that he is the father of one of Morales’ children! On the side of fairness in the workplace, Natalie really should be the one to pin down that job once and for all.

Do you think Annette offered Matt an ultimatum? Who do you think should replace Ann Curry? Leave us a comment and let us know what you think!