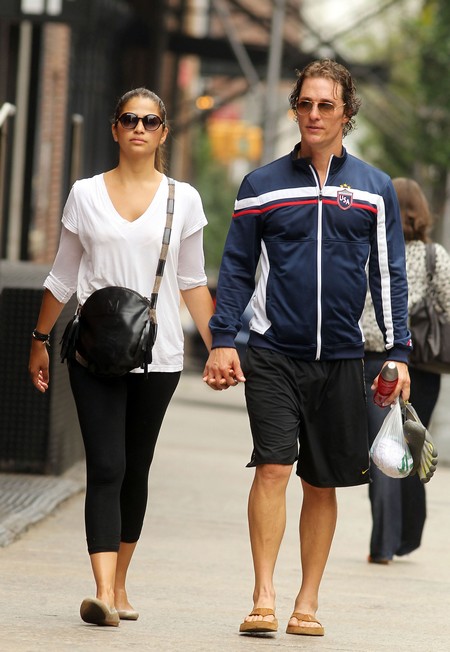 Third times’ a charm for Matthew McConaughey and his new wife, Camilla Alves. The couple, who recently tied the knot in Texas last month, just announced that they are expecting baby number 3.

They are already parents to son Levi, 4, and daughter Vida, 2.  While they have been partners for over 6 years, fans wondered why they had decided to finally get married and seal the deal.  I’m going to go out on a limb and say that perhaps the discovery of Camilla’s pregnancy had something to do with it.

Matt sure has a lot to look forward to these days, his recent movie Magic Mike, is soaring high at the box office. He plays an eccentric manager-emcee to a group of all-male dancers and let’s just say the man looks damn good topless!

And now he has a new baby to look forward to.  It was Matt himself that broke the news to the world on July 4th via twitter by saying:  “happy birthday America, more good news, Camila and I are expecting our 3rd child, God bless, just keep livin,”

Of having kids, the actor has said:  “When I was 20, I didn’t know what I wanted for a career but I knew I wanted to be a father. The men I looked up to the most were fathers – men who raised good kids.  My life is healthy. Personal life is good, career feels good and we’ll just keep on cultivating,”