Isabella Brewster is said to be Russell Brand’s girlfriend. Yep, Mr. Brand is at it already! It has only been one day since his divorce from Katy Perry became officially legal, but Mr. Brand is jumping back into the dating scene face first and Miss Brewster has happily obliged.

According to reports, Jordana Brewster’s younger sister has been dating Brand for a few weeks and from what it seems like Brand is smitten or just glad to have a woman’s attention. A source said, “She’s cute. She is all over him and Russell loves it.”

What is interesting about this Isabella character is that she is no stranger to the celebrity dating scene. Though she may not be famous for anything with real substance, she is known for getting freaky with Hollywood men. Back in 2009, Brewster was sharing a bed with Bradley Cooper right before Cooper moved onto Renee Zellweger. After THAT didn’t pan out for her, Isabella moved on to Heroes actor Milo Ventimiglia.

What I would like to know is how Isabella charms these guys because apparently she has no problem snagging up a big name celeb. I just hope that this chick realizes that she is the rebound in this case and we all know about Russell’s womanizing ways! All I have to say is I didn’t warn you, girl.

And just for fun, here’s a pic of Isabella giving her dog a big fat sloppy smooch. Cute, right? 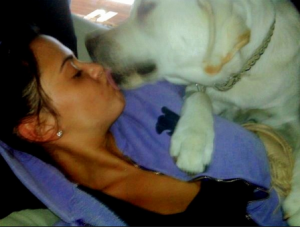